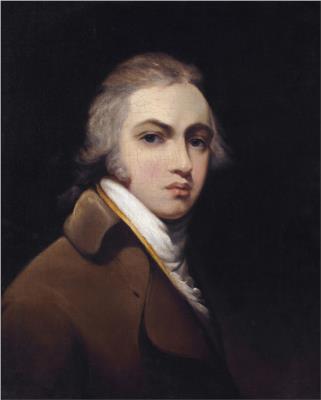 Lawrence was a child prodigy. He was born in Bristol and began drawing in Devizes, where his father was an innkeeper. At the age of ten, having moved to Bath, he was supporting his family with his pastel portraits. At eighteen he went to London and soon established his reputation as a portrait painter in oils, receiving his first royal commission, a portrait of Queen Charlotte, in 1790. He stayed at the top of his profession until his death, aged 60, in 1830.

Self-taught, he was a brilliant draughtsman and known for his gift of capturing a likeness, as well as his virtuoso handling of paint. He became an associate of the Royal Academy in 1791, a full member in 1794, and president in 1820. In 1810 he acquired the generous patronage of the Prince Regent, was sent abroad to paint portraits of allied leaders for the Waterloo chamber at Windsor Castle, and is particularly remembered as the Romantic portraitist of the Regency. Lawrence's love affairs were not happy (his tortuous relationships with Sally and Maria Siddons became the subject of several books) and, in spite of his success, he spent most of life deep in debt. He never married. At his death, Lawrence was the most fashionable portrait painter in Europe. His reputation waned during Victorian times, but has since been partially restored.

Thomas Lawrence was born at 6 Redcross Street, Bristol, the youngest surviving child of Thomas Lawrence, a supervisor of excise, and Lucy Read, the daughter of a clergyman. The couple had 16 children but only five survived infancy: Lawrence's brother Andrew became a clergyman; William had a career in the army; sisters Lucy and Anne married a solicitor and a clergyman (Lawrence's nephews included Andrew Bloxam). Soon after Thomas was born his father decided to become an innkeeper and took over the White Lion Inn and next-door American Coffee House in Broad Street, Bristol. But the venture did not prosper and in 1773 Lawrence senior removed his family from Bristol and took over the tenancy of the Black Bear Inn in Devizes, a favourite stopping place for the London gentry who were making their annual trip to take the waters at Bath.

It was during the family's six-year stay at the Black Bear Inn that Lawrence senior began to make use of his son's precocious talents for drawing and reciting poetry. Visitors would be greeted with the words "Gentlemen, here's my son – will you have him recite from the poets, or take your portraits?" Among those who listened to a recitation from Tom, or Tommy as he was called, was the actor David Garrick. Lawrence's formal schooling was limited to two years at The Fort, a school in Bristol, when he was aged six to eight, and a little tuition in French and Latin from a dissenting minister. He also became accomplished in dancing, fencing, boxing and billiards. By the age of ten his fame had spread sufficiently for him to receive a mention in Daines Barrington's Miscellanies as "without the most distant instruction from anyone, capable of copying historical pictures in a masterly style". But once again Lawrence senior failed as a landlord and, in 1779, he was declared bankrupt and the family moved to Bath. From now on, Lawrence was to support his parents with the money he earned from his portraits.