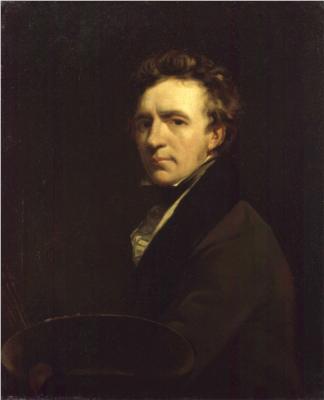 Jackson was born in Lastingham, Yorkshire, and started his career as an apprentice tailor to his father, who opposed the artistic ambitions of his son. However, he enjoyed the support of Henry Phipps, 1st Earl of Mulgrave (1755–1831), who recommended him to the Earl of Carlisle; as well as that of Sir George Beaumont, 7th Baronet, who offered him residence at his own home and ₤50 per year. As a result, Jackson was able to attend the Royal Academy Schools, where he befriended David Wilkie and B. R. Haydon. At Castle Howard, residence of the Earl of Carlisle, he could study and copy from a large collection of paintings. His watercolours were judged to be of uncommon quality.

By 1807 Jackson's reputation as a portrait painter was assured, and he made the transition to oils steadily, if not easily, regularly forwarding paintings to Somerset House. After a visit to the Netherlands and Flanders with Edmund Phipps in 1816, he accompanied Sir Francis Chantrey on a trip to Switzerland, Rome, Florence and Venice in 1819. In Rome he was elected to the Academy of St Luke. His portrait of Antonio Canova, painted on this trip, was regarded as outstanding.

Jackson was a prolific portraitist, strongly showing the influence of Sir Thomas Lawrence and Henry Raeburn in his work. His sitters included the Duke of Wellington, the explorer Sir John Franklin and some noted Wesleyan ministers. His 1823 portrait of Lady Dover, wife of George Agar-Ellis, 1st Baron Dover, was widely acclaimed.

John Jackson was married twice – the first marriage was to the daughter of a jeweller, the second to Matilda the daughter of the painter James Ward and a niece of George Morland. He died in St John's Wood, London.

His son Mulgrave Phipps Jackson was born on August 5, 1830 and died on October 4, 1913. A painter himself, exhibited in the Royal Academy for 12 years. He had at least one daughter, Ida Augusta Jackson, married Roeneke (December 27, 1851, London – January 6, 1874, Florence), buried in the English Cemetery, Florence.