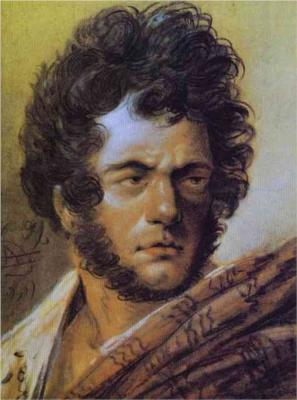 Aleksander Orłowski (9 March 1777 – 13 March 1832) was a Polish painter and sketch artist, and a pioneer of lithography in the Russian Empire.

Orłowski was born in 1777 in Warsaw to a tavern-keeper. In early childhood he became known as a prodigy, and soon Izabela Czartoryska financed his first painting classes with the artist Jan Piotr Norblin. In 1793 Orłowski joined the Polish Army and fought in the Kościuszko Uprising against Imperial Russia and Prussia; he was wounded and returned to Warsaw for further studies, financed by Prince Józef Poniatowski. He studied with many notable painters of the age, including Norblin, Marcello Bacciarelli and Wincenty Lesserowicz.

In 1802, after the Partitions of Poland, he moved to Russia, where he became a pioneer of lithography.

His works include countless sketches of everyday life in Poland and Russia, and scenes from the Kościuszko Uprising and other Polish wars.