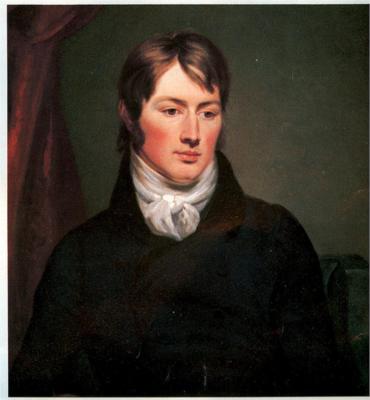 John Constable, RA (/ˈkʌnstəbəl, ˈkɒn-/; 11 June 1776 – 31 March 1837) was an English Romantic painter. Born in Suffolk, he is known principally for his landscape paintings of Dedham Vale, the area surrounding his home — now known as "Constable Country" — which he invested with an intensity of affection. "I should paint my own places best", he wrote to his friend John Fisher in 1821, "painting is but another word for feeling".

His most famous paintings include Wivenhoe Park of 1816,Dedham Vale of 1802 and The Hay Wain of 1821. Although his paintings are now among the most popular and valuable in British art, Constable was never financially successful. He did not become a member of the establishment until he was elected to the Royal Academy at the age of 52. His work was embraced in France, where he sold more works than in his native England and inspired the Barbizon school.

John Constable was born in East Bergholt, a village on the River Stour in Suffolk, to Golding and Ann (Watts) Constable. His father was a wealthy corn merchant, owner of Flatford Mill in East Bergholt and, later, Dedham Mill in Essex. Golding Constable owned a small ship, The Telegraph, which he moored at Mistley on the Stour estuary, and used to transport corn to London. He was a cousin of the London tea merchant, Abram Newman. Although Constable was his parents' second son, his older brother was intellectually disabled and John was expected to succeed his father in the business. After a brief period at a boarding school in Lavenham, he was enrolled in a day school in Dedham. Constable worked in the corn business after leaving school, but his younger brother Abram eventually took over the running of the mills.

In his youth, Constable embarked on amateur sketching trips in the surrounding Suffolk and Essex countryside, which was to become the subject of a large proportion of his art. These scenes, in his own words, "made me a painter, and I am grateful"; "the sound of water escaping from mill dams etc., willows, old rotten planks, slimy posts, and brickwork, I love such things." He was introduced to George Beaumont, a collector, who showed him his prized Hagar and the Angel by Claude Lorrain, which inspired Constable. Later, while visiting relatives in Middlesex, he was introduced to the professional artist John Thomas Smith, who advised him on painting but also urged him to remain in his father's business rather than take up art professionally.

In 1799, Constable persuaded his father to let him pursue a career in art, and Golding granted him a small allowance. Entering the Royal Academy Schools as a probationer, he attended life classes and anatomical dissections, and studied and copied old masters. Among works that particularly inspired him during this period were paintings by Thomas Gainsborough, Claude Lorrain, Peter Paul Rubens, Annibale Carracci and Jacob van Ruisdael. He also read widely among poetry and sermons, and later proved a notably articulate artist.