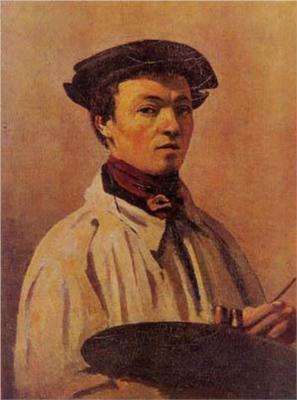 A pivotal figure in landscape painting, Jean-Baptiste Camille Corot was an influential and prolific artist, producing over 3,000 works during his lifetime, and inspiring countless numbers of forgeries and copies. Although he was not especially interested or gifted in art at a young age, he decided to make the professional switch from businessman to artist at the age of 26, and in 1821, immediately began with the study of landscapes. He focused on two types of landscapes, historical landscapes, containing ancient and mythological creatures, and realistic landscapes, mostly of Northern Europe, with faithful renditions of flora and fauna, often mixing the two genres together.

In his travels through Italy to study Renaissance paintings, he was entranced by the light of the countryside, which was to influence his color palette throughout his paintings. Although he was also entranced by the Italian women, he wrote that his goal in life was to be committed to painting, and thus he had no time for marriage.

Throughout the 1840’s his reputation grew as a great painter, and by 1848 he was selected as a jury member of the Paris Salon. In 1867, he was promoted to an officer of the Salon. In his later life, Corot was very financially successful, and he shared his wealth with all those around him. In 1871, he donated 2,000 francs to the Poor of Paris, and a year later he bought a house for his fellow artist Honore Daumier, who by then was blind and destitute. He also donated 10,000 francs to the widow of another fellow artist, Jean-Francois Millet, to help her support her children. In the year before his death at age 78, his friends and students, feeling that he was underappreciated and professionally neglected, presented him with a gold medal.

Jean-Baptiste-Camille Corot (French: [ʒɑ̃ ba.tist ka.mij kɔ.ʁo]; July 16, 1796 – February 22, 1875) was a French landscape and portrait painter as well as a printmaker in etching. He is a pivotal figure in landscape painting and his vast output simultaneously references the Neo-Classical tradition and anticipates the plein-air innovations of Impressionism.

Jean-Baptiste-Camille Corot (Camille Corot for short) was born in Paris on July 16, 1796, in a house at 125 Rue du Bac, now demolished. His family were bourgeois people—his father was a wigmaker and his mother a milliner—and unlike the experience of some of his artistic colleagues, throughout his life he never felt the want of money, as his parents made good investments and ran their businesses well. After his parents married, they bought the millinery shop where his mother had worked and his father gave up his career as a wigmaker to run the business side of the shop. The store was a famous destination for fashionable Parisians and earned the family an excellent income. Corot was the second of three children born to the family, who lived above their shop during those years.

Corot received a scholarship to study at the Lycée Pierre-Corneille in Rouen, but left after having scholastic difficulties and entered a boarding school. He "was not a brilliant student, and throughout his entire school career he did not get a single nomination for a prize, not even for the drawing classes." Unlike many masters who demonstrated early talent and inclinations toward art, before 1815 Corot showed no such interest. During those years he lived with the Sennegon family, whose patriarch was a friend of Corot's father and who spent much time with young Corot on nature walks. It was in this region that Corot made his first paintings after nature. At nineteen, Corot was a "big child, shy and awkward. He blushed when spoken to. Before the beautiful ladies who frequented his mother's salon, he was embarrassed and fled like a wild thing... Emotionally, he was an affectionate and well-behaved son, who adored his mother and trembled when his father spoke." When Corot's parents moved into a new residence in 1817, the 21-year-old Corot moved into the dormer-windowed room on the third floor, which became his first studio as well.

With his father's help he apprenticed to a draper, but he hated commercial life and despised what he called "business tricks", yet he faithfully remained in the trade until he was 26, when his father consented to his adopting the profession of art. Later Corot stated, "I told my father that business and I were simply incompatible, and that I was getting a divorce." The business experience proved beneficial, however, by helping him develop an aesthetic sense through his exposure to the colors and textures of the fabrics. Perhaps out of boredom, he turned to oil painting around 1821 and began immediately with landscapes. Starting in 1822 after the death of his sister, Corot began receiving a yearly allowance of 1500 francs which adequately financed his new career, studio, materials, and travel for the rest of his life. He immediately rented a studio on quai Voltaire.