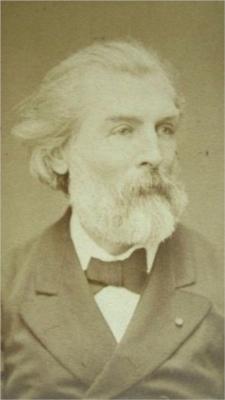 Jules Dupré (April 5, 1811 – October 6, 1889) was a French painter, one of the chief members of the Barbizon school of landscape painters. If Corot stands for the lyric and Rousseau for the epic aspect of the poetry of nature, Dupré is the exponent of his tragic and dramatic aspects.

Dupré was born in Nantes. He exhibited first at the Salon in 1831, and three years later was awarded a second-class medal. In the same year he came to England, where he was impressed by the genius of Constable. From then on he learned how to express movement in nature; and the districts around Southampton and Plymouth, with its wide, unbroken expanses of water, sky and ground, gave him good opportunities for studying the tempestuous motion of storm-clouds and the movement of foliage driven by the wind. He was named an Officer of the French Légion d'honneur in 1848.

Dupré's colour is sonorous and resonant. He showed preference for using dramatic sunset effects and stormy skies and seas as the subjects of his paintings. Late in life he changed his style and gained appreciably in largeness of handling and arrived at greater simplicity in his colour harmonies. Among his chief works are the Morning and Evening at the Louvre, and the early Crossing the Bridge in the Wallace Collection.