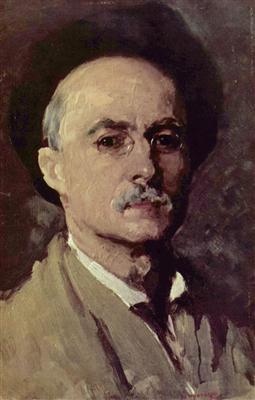 Nicolae Grigorescu was an important Romanian painter, considered one of the founders of modern Romanian painting, alongside Ion Andreescu and Ștefan Luchian. Having studied at École des Beaux-Arts in Paris, he had contact with Pierre-Auguste Renoir, after which he left Paris to join the Barbizon school, where he adopted the „en plein art” way of painting. Several of his works were featured, among others, at the Universal Exhibitions in Paris. For most of his last decades, Grigorescu spend time either painting in Paris or, especially after 1890, in Câmpina, where he started his famous series of pastorales. He was named honorary member of the Romanian Academy in 1899.

Nicolae Grigorescu (Romanian pronunciation: [nikoˈla.e ɡriɡoˈresku]; 15 May 1838 – 21 July 1907) was one of the founders of modern Romanian painting.

He was also a writer. He was born in Pitaru, Dâmboviţa County, Wallachia now called Romania. In 1843 the family moved to Bucharest. At a young age (between 1846 and 1850), he became an apprentice at the workshop of the painter Anton Chladek and created icons for the church of Băicoi and the Monastery of Căldăruşani (ro). In 1856 he created the historical composition Mihai scăpând stindardul (Michael the Brave saving the flag), which he presented to the Wallachian Prince Barbu Ştirbei, together with a petition asking for financial aid for his studies.

In the autumn of 1861, young Grigorescu left for Paris, where he studied at the École des Beaux-Arts. He also attended the workshop of Sébastien Cornu, where he had as a colleague Pierre-Auguste Renoir. Knowing his weaknesses, he concentrated drawing and composition. However, he soon left this workshop and, attracted by the artistic concepts of the Barbizon school, he left Paris for that village, where he became the associate of artists such as Jean-François Millet, Jean-Baptiste-Camille Corot, Gustave Courbet and Théodore Rousseau. Under the influence of the movement, Grigorescu looked for new means of expression and followed the trend of en plein air painting, which was also important in Impressionism. As part of the Universal Exposition of Paris (1867), he contributed seven works. Then he exhibited at the Paris Salon of 1868 the painting Tânără ţigancă (Young Gypsy girl).

He returned to Romania a few times and starting in 1870 he participated in the exhibits of living artists and those organized by the Society of the Friends of the Belle-Arts. Between 1873 and 1874 he traveled to Italy, Greece and Vienna.

In 1877 he was called to accompany the Romanian Army as a "frontline painter" in the Romanian War of Independence. During the battles at the Grivitsa Strongpoint and Oryahovo, he made drawings and sketches which later used in creating larger-scale works.

From 1879 to 1890 he worked in France, especially in Vitré, Brittany, and in his workshop in Paris. In 1890 he settled in Câmpina and started depicting pastoral themes, especially portraits of peasant girls, pictures of ox carts on dusty country roads and other landscapes. He was named honorary member of the Romanian Academy in 1899.

At the moment of his death, Grigorescu had been working on his Întoarcerea de la bâlci (The Return from the Fair).

There is a metro station named after Grigorescu in Bucharest. It was given his name in 1990, before which it was named after Communist army general Leontin Sălăjan.