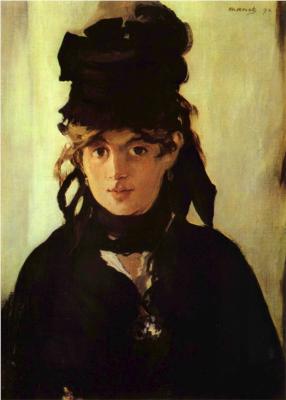 Berthe Morisot with a Bouquet of Violets - Edouard Manet

Berthe Marie Pauline Morisot (French: [mɔʁizo]; January 14, 1841 – March 2, 1895) was a painter and a member of the circle of painters in Paris who became known as the Impressionists. She was described by Gustave Geffroy in 1894 as one of "les trois grandes dames" of Impressionism alongside Marie Bracquemond and Mary Cassatt.

In 1864, she exhibited for the first time in the highly esteemed Salon de Paris. Sponsored by the government, and judged by Academicians, the Salon was the official, annual exhibition of the Académie des beaux-arts in Paris. Her work was selected for exhibition in six subsequent Salons until, in 1874, she joined the "rejected" Impressionists in the first of their own exhibitions, which included Paul Cézanne, Edgar Degas, Claude Monet, Camille Pissarro, Pierre-Auguste Renoir, and Alfred Sisley. It was held at the studio of the photographer Nadar.

She was married to Eugène Manet, the brother of her friend and colleague Édouard Manet.

Morisot was born in Bourges, France, into an affluent bourgeois family. Her father, Edmé Tiburce Morisot, was the prefect (senior administrator) of the department of Cher. He also studied architecture at École des Beaux Arts. Her mother, Marie-Joséphine-Cornélie Thomas, was the great-niece of Jean-Honoré Fragonard, one of the most prolific Rococo painters of the ancien régime. She had two older sisters, Yves (1838–1893) and Edma (1839–1921), plus a younger brother, Tiburce, born in 1848. The family moved to Paris in 1852, when Morisot was a child.

It was commonplace for daughters of bourgeois families to receive art education, so Berthe and her sisters Yves and Edma were taught privately by Geoffroy-Alphonse Chocarne and Joseph Guichard. Morisot and her sisters initially started taking lessons so that they could each make a drawing for their father for his birthday. In 1857 Guichard, who ran a school for girls in Rue des Moulins, introduced Berthe and Edma to the Louvre gallery where they could learn by looking, and from 1858 they learned by copying paintings. The Morisots were not only forbidden to work at the museum unchaperoned, but they were also totally barred from formal training. However, the museum served another key purpose, because it enabled them to get acquainted with young male artists, such as Manet and Monet.

He also introduced them to the works of Gavarni. Guichard later became the director of École des Beaux Arts where Morisot's father earned his degree. In 1861 Guichard introduced Berthe to Jean-Baptiste-Camille Corot, a French painter, who influenced her early landscapes.

As art students, Berthe and Edma worked closely together until 1869, when Edma married Adolphe Pontillon, a naval officer, moved to Cherbourg, and had less time to paint. Letters between the sisters show a loving relationship, underscored by Berthe's regret at the distance between them and Edma's withdrawal from painting. Edma wholeheartedly supported Berthe's continued work and their families always remained close. Edma wrote “… I am often with you in thought, dear Berthe. I’m in your studio and I like to slip away, if only for a quarter of an hour, to breathe that atmosphere that we shared for many years…”.