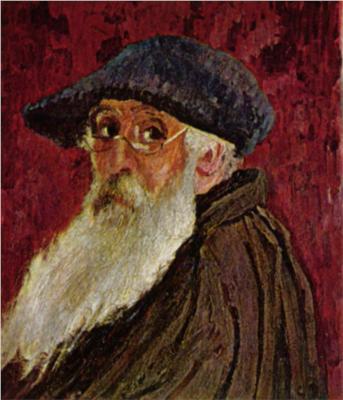 Camille Pissarro (French: [kamij pisaʁo]; 10 July 1830 – 13 November 1903) was a Danish-French Impressionist and Neo-Impressionist painter born on the island of St Thomas (now in the US Virgin Islands, but then in the Danish West Indies). His importance resides in his contributions to both Impressionism and Post-Impressionism. Pissarro studied from great forerunners, including Gustave Courbet and Jean-Baptiste-Camille Corot. He later studied and worked alongside Georges Seurat and Paul Signac when he took on the Neo-Impressionist style at the age of 54.

In 1873 he helped establish a collective society of fifteen aspiring artists, becoming the "pivotal" figure in holding the group together and encouraging the other members. Art historian John Rewald called Pissarro the "dean of the Impressionist painters", not only because he was the oldest of the group, but also "by virtue of his wisdom and his balanced, kind, and warmhearted personality". Cézanne said "he was a father for me. A man to consult and a little like the good Lord," and he was also one of Gauguin's masters. Renoir referred to his work as "revolutionary", through his artistic portrayals of the "common man", as Pissarro insisted on painting individuals in natural settings without "artifice or grandeur".

Pissarro is the only artist to have shown his work at all eight Paris Impressionist exhibitions, from 1874 to 1886. He "acted as a father figure not only to the Impressionists" but to all four of the major Post-Impressionists, including Georges Seurat, Paul Cézanne, Vincent van Gogh and Paul Gauguin.

Jacob Abraham Camille Pissarro was born on 10 July 1830 on the island of St. Thomas to Frederick and Rachel Manzano de Pissarro. His father was of Portuguese Jewish descent and held French nationality. His mother was from a French-Jewish family from the island of St. Thomas. His father was a merchant who came to the island from France to deal with the hardware store of a deceased uncle and married his widow. The marriage caused a stir within St. Thomas' small Jewish community because she was previously married to Frederick's uncle and according to Jewish law a man is forbidden from marrying his aunt. In subsequent years his four children were forced to attend the all-black primary school. Upon his death, his will specified that his estate be split equally between the synagogue and St. Thomas' Protestant church.

When Camille was twelve his father sent him to boarding school in France. He studied at the Savary Academy in Passy near Paris. While a young student, he developed an early appreciation of the French art masters. Monsieur Savary himself gave him a strong grounding in drawing and painting and suggested he draw from nature when he returned to St. Thomas, which he did when he was seventeen. However, his father preferred he work in his business, giving him a job working as a cargo clerk. He took every opportunity during those next five years at the job to practise drawing during breaks and after work.