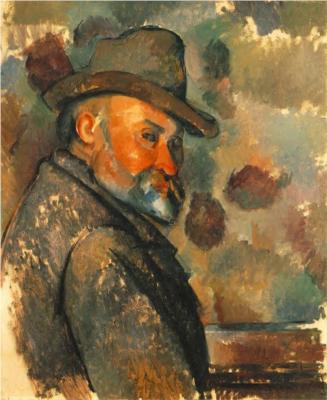 French Post-Impressionist Paul Cézanne was one of the most influential artists in the history of modern painting. His works and ideas influenced the aesthetic development of 20th-century artists and art movements like Cubism and Fauvism. Cézanne was born on January 19, 1839, in Aix-en-Provence, France to a well-off bourgeois family. He began painting in 1860 in his hometown and later studied in Paris. Dominated by dark colors, Cézanne’s early paintings like Paul Alexis Reading a Manuscript to Émile Zola (c.1870) were influenced by the expressive brushwork of Romantic painter Eugène Delacroix. At the same time, he was influenced by the Realism of Gustave Courbet, who was known for his unsentimental treatment of commonplace subjects.

During his formative years, Cézanne became closely associated with Impressionist painters Claude Monet, Camille Pissarro, and Pierre-Auguste Renoir. This also influenced his artistic style: he brightened his color palette and used short brushstrokes that were characteristic of the Impressionist painting technique. The artist’s Impressionist period is best embodied in paintings like The House of the Suicide (1873) and A Modern Olympia (1874) – that was exhibited at the first Impressionist exhibition in 1874. Because his work was largely rejected by the public, Cézanne grew more isolated, cutting his ties with the Impressionist movement. From the late 1870s, he spent most of his time in the South of France, occasionally returning to Paris.

From the late 1870s to the early 1890s Cézanne worked in relative isolation and developed his mature style. From that point, he focused on painting still-lifes, landscapes, and later, portraits. In his still-life paintings, Cézanne rejected a dark palette and intense contrasts of light and shadow in favor of a more muted palette and subtle transitions between color tones. In Still Life with Apples and a Pot of Primroses (c.1890), exemplifying Cézanne’s mature style, the artist builds the form and volume of the objects through subtle gradations of color. He also abandons the traditional signal-point perspective, painting objects from multiple perspectives. Cézanne painted many landscapes, mainly near his hometown, Aix-en-Provence, for example, Mont Sainte-Victoire and the Viaduct of the Arc River Valley (1882-1885) and Montagne Sainte-Victoire (1890). In these paintings, Cézanne attempted to synthesize between a faithful depiction of the subject and the feelings the landscape inspired.

From 1890 Cézanne began to travel more: he spent five months in Switzerland and in 1894 he visited Monet, who introduced him to the sculptor Auguste Rodin and critic Gustave Geffroy. Cézanne had his first solo exhibition in 1895 at the Ambroise Vollard gallery in Paris. From this point, Cézanne began to receive recognition for his originality and innovation, and in 1899 he participated at the annual Salon des Indépendants exhibition in Paris for the first time. In his final years, he created many portraits and group paintings, including his famous series of Card Players and Bathers. One of his last paintings, the unfinished painting Large Bathers (1900-1906) at the Philadelphia Museum of Art is one of his most monumental works. Large Bathers explored the traditional theme of nudes in nature and brought forth the original and innovative interpretation of the subject. The painting holds a significant place in art history, influencing Pablo Picasso’s Les Demoiselles d'Avignon (1907) and Henri Matisse’s Bathers by a River (1909-1916). Cézanne died in 1906 in his hometown, Aix-en-Provence. His work influenced future generations of artists, both Pablo Picasso and Henri Matisse said that Cézanne "is the father of us all".

Paul Cézanne (US: /seɪˈzæn/ or UK: /sɪˈzæn/; French: [pɔl sezan]; 19 January 1839 – 22 October 1906) was a French artist and Post-Impressionist painter whose work laid the foundations of the transition from the 19th-century conception of artistic endeavor to a new and radically different world of art in the 20th century. Cézanne's often repetitive, exploratory brushstrokes are highly characteristic and clearly recognizable. He used planes of colour and small brushstrokes that build up to form complex fields. The paintings convey Cézanne's intense study of his subjects.

Cézanne is said to have formed the bridge between late 19th-century Impressionism and the early 20th century's new line of artistic enquiry, Cubism. Both Matisse and Picasso are said to have remarked that Cézanne "is the father of us all."

The Cézannes came from the commune of Saint-Sauveur (Hautes-Alpes, Occitania). Paul Cézanne was born on 19 January 1839 in Aix-en-Provence. On 22 February, he was baptized in the Église de la Madeleine, with his grandmother and uncle Louis as godparents, and became a devout Catholic later in life. His father (1798–1886), a native of Saint-Zacharie (Var), was the co-founder of a banking firm (Banque Cézanne et Cabassol) that prospered throughout the artist's life, affording him financial security that was unavailable to most of his contemporaries and eventually resulting in a large inheritance.

His mother, Anne Elisabeth Honorine Aubert (1814–1897), was "vivacious and romantic, but quick to take offence". It was from her that Cézanne got his conception and vision of life. He also had two younger sisters, Marie and Rose, with whom he went to a primary school every day.

At the age of ten Cézanne entered the Saint Joseph school in Aix. In 1852 Cézanne entered the Collège Bourbon (now Collège Mignet), where he became friends with Émile Zola, who was in a less advanced class, as well as Baptistin Baille—three friends who came to be known as "les trois inséparables" (the three inseparables). He stayed there for six years, though in the last two years he was a day scholar. In 1857, he began attending the Free Municipal School of Drawing in Aix, where he studied drawing under Joseph Gibert, a Spanish monk. From 1858 to 1861, complying with his father's wishes, Cézanne attended the law school of the University of Aix, while also receiving drawing lessons.

Going against the objections of his banker father, he committed himself to pursuing his artistic development and left Aix for Paris in 1861. He was strongly encouraged to make this decision by Zola, who was already living in the capital at the time. Eventually, his father reconciled with Cézanne and supported his choice of career. Cézanne later received an inheritance of 400,000 francs from his father, which rid him of all financial worries.

In Paris, Cézanne met the Impressionist Camille Pissarro. Initially the friendship formed in the mid-1860s between Pissarro and Cézanne was that of master and disciple, in which Pissarro exerted a formative influence on the younger artist. Over the course of the following decade their landscape painting excursions together, in Louveciennes and Pontoise, led to a collaborative working relationship between equals.