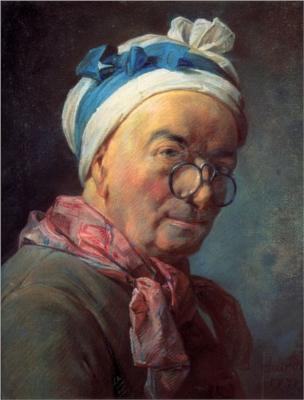 Jean-Baptiste-Siméon Chardin (French: [ʃaʁdɛ̃]; November 2, 1699 – December 6, 1779) was an 18th-century French painter. He is considered a master of still life, and is also noted for his genre paintings which depict kitchen maids, children, and domestic activities. Carefully balanced composition, soft diffusion of light, and granular impasto characterize his work.

Chardin was born in Paris, the son of a cabinetmaker, and rarely left the city. He lived on the Left Bank near Saint-Sulpice until 1757, when Louis XV granted him a studio and living quarters in the Louvre.

Chardin entered into a marriage contract with Marguerite Saintard in 1723, whom he did not marry until 1731. He served apprenticeships with the history painters Pierre-Jacques Cazes and Noël-Nicolas Coypel, and in 1724 became a master in the Académie de Saint-Luc.

According to one nineteenth-century writer, at a time when it was hard for unknown painters to come to the attention of the Royal Academy, he first found notice by displaying a painting at the "small Corpus Christi" (held eight days after the regular one) on the Place Dauphine (by the Pont Neuf). Van Loo, passing by in 1720, bought it and later assisted the young painter.

Upon presentation of The Ray in 1728, he was admitted to the Académie Royale de Peinture et de Sculpture. The following year he ceded his position in the Académie de Saint-Luc. He made a modest living by "produc[ing] paintings in the various genres at whatever price his customers chose to pay him", and by such work as the restoration of the frescoes at the Galerie François I at Fontainebleau in 1731. In November 1731 his son Jean-Pierre was baptized, and a daughter, Marguerite-Agnès, was baptized in 1733. In 1735 his wife Marguerite died, and within two years Marguerite-Agnès had died as well.

Beginning in 1737 Chardin exhibited regularly at the Salon. He would prove to be a "dedicated academician", regularly attending meetings for fifty years, and functioning successively as counsellor, treasurer, and secretary, overseeing in 1761 the installation of Salon exhibitions.

His work gained popularity through reproductive engravings of his genre paintings (made by artists such as François-Bernard Lépicié and P.-L. Sugurue), which brought Chardin income in the form of "what would now be called royalties". In 1744 he entered his second marriage, this time to Françoise-Marguerite Pouget. The union brought a substantial improvement in Chardin's financial circumstances. In 1745 a daughter, Angélique-Françoise, was born, but she died in 1746.

In 1752 Chardin was granted a pension of 500 livres by Louis XV. At the Salon of 1759 he exhibited nine paintings; it was the first Salon to be commented upon by Denis Diderot, who would prove to be a great admirer and public champion of Chardin's work. Beginning in 1761, his responsibilities on behalf of the Salon, simultaneously arranging the exhibitions and acting as treasurer, resulted in a diminution of productivity in painting, and the showing of 'replicas' of previous works. In 1763 his services to the Académie were acknowledged with an extra 200 livres in pension. In 1765 he was unanimously elected associate member of the Académie des Sciences, Belles-Lettres et Arts of Rouen, but there is no evidence that he left Paris to accept the honor. By 1770 Chardin was the 'Premier peintre du roi', and his pension of 1,400 livres was the highest in the Academy.