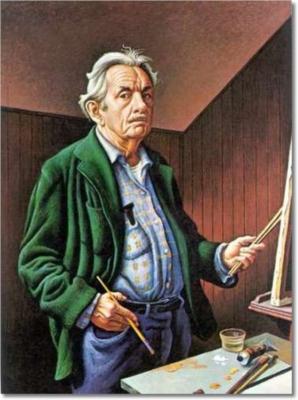 Thomas Hart Benton was an American painter and muralist, and one of the central figures associated with the Regionalist art movement of the 1930s. Together with John Steuart Curry and Grant Wood, he championed realist modern art that depicted rural scenes in the American South and Midwest. Born in 1889 in Neosho, Missouri, Benton belonged to an influential political family – his father Maecenas Eason Benton was a four-term U.S congressman. In 1906, Benton worked as a cartoonist at the Missouri paper Joplin American and later enrolled to study the Art Institute of Chicago. As part of his artistic education, he spent three years in Paris at the Académie Julian, where he was influenced by modern art movements such as Synchromism and Cubism.

In 1911, Benton returned to the United States and settled in New York. Benton’s early works, such as House in a Cubist Landscape (ca. 1915-1920) were largely painted in a modernist and often abstract style. However, by the early 1920s Benton abandoned this manner in favor of a naturalistic style influenced by old masters such as El Greco and Tintoretto. In 1924, he began to travel throughout the American South and Midwest, sketching and observing daily life in rural America. Inspired by his midwestern roots, Benton emerged as an advocate of Regionalist art, that focused on painting realist scenes of the rural South and Midwest. In 1930, he was commissioned to paint a mural by the New School of Social Research in New York. The result was the ten-panel mural America Today (1930-1931) that depicted the broad scope of American life throughout the 1920s. Painted in a dynamic figurative style, the monumental mural showed geographic diversity as well as the diversity of labor in the United States.

Benton became known as one of the most innovative mural painters at a time when the medium was greatly significant in America. In 1932, he painted The Arts of Life in America (1932), an eight-panel mural commissioned by the Whitney Museum of American Art. The mural represents the ‘arts’ of everyday life: music, games, dance, and sports. The panels provide a comprehensive survey of life in the 1930s, capturing both the excitement and the tensions that marked the turbulent decade. Panels such as Arts of the City (1932) and Unemployment, Radical Protest, Speed also referenced the political realities of crime and unemployment, that were induced by the Great Depression. In December 1934, his self-portrait was featured as one of the earliest color covers of Time magazine. During this period, Benton also taught at Art Students League in New York, where Jackson Pollock was one of his students.

In 1935, he left New York and moved to Kansas City, Missouri, where he continued to teach at the Kansas City Art Institute. His first major commission was a mural for the Missouri State Capitol, A Social History of the State of Missouri (1936). Benton continued to emphasize the importance of rural American life in his art, in landscapes like Threshing Wheat (1939) and July Hay (1942). He was also fond of biblical and classical subjects, which he reimagined in a contemporary midwestern setting. Well-known examples include the allegorical nude Persephone (1939) and the mural Achelous and Hercules (1947). After World War II, Regionalism fell out of fashion and Abstract Expressionism became the dominant trend in American art. Over the next thirty years, Benton continued to produce paintings, lithographs, and murals that centered around rural subjects. He died of a heart attack on January 19, 1975, in his studio in Kansas City before completing The Sources of Country Music (1975), a mural for the Country Music Hall of Fame in Nashville, Tennessee.

Thomas Hart Benton (April 15, 1889 – January 19, 1975) was an American painter and muralist. Along with Grant Wood and John Steuart Curry, he was at the forefront of the Regionalist art movement. His fluid, sculpted figures in his paintings showed everyday people in scenes of life in the United States. Though his work is strongly associated with the Midwestern United States, he studied in Paris, lived in New York City for more than 20 years and painted scores of works there, summered for 50 years on Martha's Vineyard off the New England coast, and also painted scenes of the American South and West.

Benton was born in Neosho, Missouri, into an influential family of politicians. He had two younger sisters, Mary and Mildred, and a younger brother, Nathaniel. His mother was Elizabeth Wise Benton and his father, Colonel Maecenas Benton, was a lawyer and four times elected as U.S. congressman. Known as the "little giant of the Ozarks", Maecenas named his son after his own great-uncle, Thomas Hart Benton, one of the first two United States Senators elected from Missouri. Given his father's political career, Benton spent his childhood shuttling between Washington, D.C. and Missouri. His father sent him to Western Military Academy in 1905-06, hoping to shape him for a political career. Growing up in two different cultures, Benton rebelled against his father's plans. He wanted to develop his interest in art, which his mother supported. As a teenager, he worked as a cartoonist for the Joplin American newspaper, in Joplin, Missouri.

With his mother's encouragement, in 1907 Benton enrolled at The School of The Art Institute of Chicago. Two years later, he moved to Paris in 1909 to continue his art education at the Académie Julian. His mother supported him financially and emotionally to work at art until he married in his early 30s. His sister Mildred said, "My mother was a great power in his growing up." In Paris, Benton met other North American artists, such as the Mexican Diego Rivera and Stanton Macdonald-Wright, an advocate of Synchromism. Influenced by the latter, Benton subsequently adopted a Synchromist style.

After studying in Europe, Benton moved to New York City in 1912 and resumed painting. During World War I, he served in the U.S. Navy and was stationed at Norfolk, Virginia. His war-related work had an enduring effect on his style. He was directed to make drawings and illustrations of shipyard work and life, and this requirement for realistic documentation strongly affected his later style. Later in the war, classified as a "camoufleur," Benton drew the camouflaged ships that entered Norfolk harbor. His work was required for several reasons: to ensure that U.S. ship painters were correctly applying the camouflage schemes, to aid in identifying U.S. ships that might later be lost, and to have records of the ship camouflage of other Allied navies. Benton later said that his work for the Navy "was the most important thing, so far, I had ever done for myself as an artist."