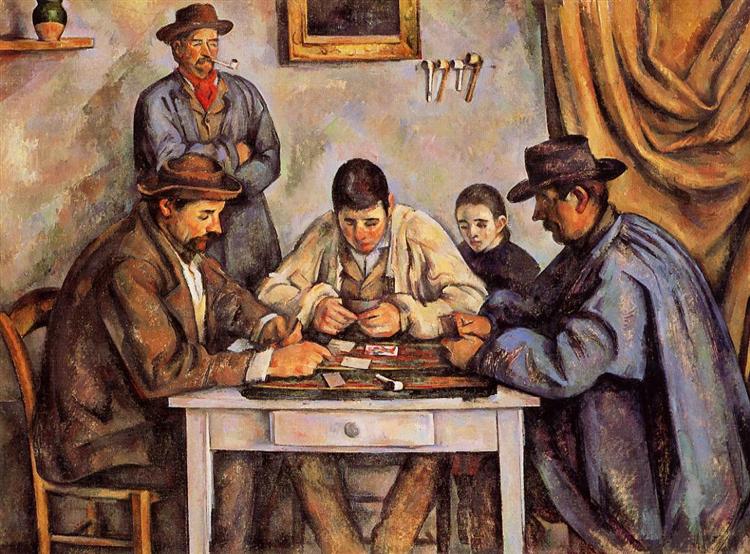 In his final period in the early 1890s, Paul Cézanne created a series of five oil paintings that depicted the subject of card players. The Card Players (1890-1892) at the Barnes Foundation in Philadelphia, is the largest and the most elaborate painting of the series. The Barnes version is a five-figure composition and the only one that includes the figure of the young boy who observes the card game. A more condensed version of this painting is The Card Players (1890-1892) at the Metropolitan Museum of Art in New York, that has only four figures and a less detailed background. The other three paintings in the series are two-figure compositions, depicting two card players sitting opposite each other.

It was generally assumed that Cézanne first worked on the multi-figure paintings and then moved on to the simpler compositions featuring only two card players. However, recent technical examinations of the canvases indicate that the opposite was true. Scans revealed that the Metropolitan version was extensively reworked, much more than the larger canvas (135.3 x 181.9) in the Barnes Foundation. Therefore, it seems more likely that Cézanne expanded the composition, adding more figures and elements as he painted the series. Cézanne carefully crafted each painting, basing them on multiple preparatory sketches and figure studies he made of local farmers. For example, Man with a Pipe (Study for The Card Players) (1890-1892) was a study of the figure leaning against the wall in the paintings from the Barnes Foundation and the Metropolitan Museum.

The series was the artist’s chief contribution to genre painting – a genre that focused on everyday life, depicting people engaged in mundane activities. Cézanne adopted the motif of card players from 17th century Dutch and French genre paintings, such as Card Players in an Interior (c. 1660) by Jan Steen and The Card Players (Les joueurs de cartes) (c. 1635-1640) by Le Nain brothers. In comparison to his predecessors, Cézanne’s paintings lack drama and narrative. Instead, his paintings have a simple setting with subdued figures smoking their pipes and playing cards. Cézanne’s card players show little expression, appearing passive and reserved or immersed in their respective tasks. The artist also limited the facial expressions of the players: their facial features were usually painted in a few strokes that marked their shadowed or downcast eyes.

Art historians also suggest that Cézanne’s composition was influenced by the works of Renaissance masters. Possible prototypes include Titian’s Supper at Emmaus (c. 1530) and a lost painting by Giovanni Bellini of the same subject (c. 1490), that is known through copies and engravings. Similarly, Cézanne used the arrangement of the elements below the tabletop to create a counterpoint to the figures in the composition. This could also reflect the artist’s desire to enhance the everyday scene of card players with the monumentality of a religious subject. Others suggest that Cézanne treated The Card Players like his still life paintings, animating the surface with sequences of color contrasts, that alternate between light and dark, warm and cool hues. In the Barnes version, this is evident in details like the patterned tabletop that is formed through the color contrast between light blue and deep shades of red and violet.