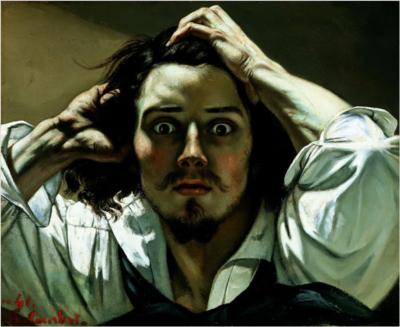 Gustave Courbet was a controversial French painter, who bridged the gap between Romanticism and the Impressionist school of painters. He was controversial not only because he addressed social issues with his work, such as peasants and the working condition of the poor, and the rural bourgeoisie, but also because of the unsentimental way in which he portrayed them. Unlike the Romantic school of painters, Courbet did not use smooth lines and soft forms. Instead, he employed spontaneous brush strokes and a roughness of paint texture, which indicated that he was observing his subject directly from life, and thus challenging the academic ideas of the way art should be painted. Because of his development of a realistic form of painting, Courbet was a celebrity, and considered a genius, socialist, and savage. He also encouraged the perception of himself as an unschooled peasant.

Courbet grew up in a family with anti-monarchical sentiments, as his grandfather was a member of the French Revolution, and thus used his popularity as a platform to write essays and dissertations on political anarchism, democratic and socialist ideas. He became even more controversial in the 1860’s when he began painting erotic nude scenes, ranging from the detailed female genitalia in The Origin of the World, and two nude women sleeping in Le Sommeil. This catapulted his social popularity, and in the 1870’s used his voice to argue for the dismantling of the Vendome Column, a symbol of imperial power. After the column’s dismantlement, and an ensuing change in power, Courbet was held responsible for the act, and sent to prison for six months. In 1873 he was held responsible to pay to re-erect the column, and he went into a self-exile in Switzerland in order to avoid bankruptcy. In 1877 it was determined that he should pay 10,000 francs each year until his 91st birthday, at which time the debt would be paid off. Courbet died in 1877 at age 58 of liver failure, one day before the first installment was due.

Jean Désiré Gustave Courbet (French: [ɡystav kuʁbɛ]; 10 June 1819 – 31 December 1877) was a French painter who led the Realism movement in 19th-century French painting. Committed to painting only what he could see, he rejected academic convention and the Romanticism of the previous generation of visual artists. His independence set an example that was important to later artists, such as the Impressionists and the Cubists. Courbet occupies an important place in 19th-century French painting as an innovator and as an artist willing to make bold social statements through his work.

Courbet's paintings of the late 1840s and early 1850s brought him his first recognition. They challenged convention by depicting unidealized peasants and workers, often on a grand scale traditionally reserved for paintings of religious or historical subjects. Courbet's subsequent paintings were mostly of a less overtly political character: landscapes, seascapes, hunting scenes, nudes and still lifes. An active socialist, Courbet was active in the political developments of France. He was imprisoned for six months in 1871 for his involvement with the Paris Commune, and lived in exile in Switzerland from 1873 until his death.

Gustave Courbet was born in 1819 to Régis and Sylvie Oudot Courbet in Ornans (department of Doubs). Being a prosperous farming family, anti-monarchical feelings prevailed in the household. (His maternal grandfather fought in the French Revolution.) Courbet's sisters, Zoé, Zélie and Juliette, were his first models for drawing and painting. After moving to Paris he often returned home to Ornans to hunt, fish and find inspiration.

He went to Paris in 1839 and worked at the studio of Steuben and Hesse. An independent spirit, he soon left, preferring to develop his own style by studying the paintings of Spanish, Flemish and French masters in the Louvre, and painting copies of their work.

His first works were an Odalisque inspired by the writing of Victor Hugo and a Lélia illustrating George Sand, but he soon abandoned literary influences, choosing instead to base his paintings on observed reality. Among his paintings of the early 1840s are several self-portraits, Romantic in conception, in which the artist portrayed himself in various roles. These include Self-Portrait with Black Dog (c. 1842–44, accepted for exhibition at the 1844 Paris Salon), the theatrical Self-Portrait which is also known as Desperate Man (c. 1843–45), Lovers in the Countryside (1844, Musée des Beaux-Arts, Lyon), The Sculptor (1845), The Wounded Man (1844–54, Musée d'Orsay, Paris), The Cellist, Self-Portrait (1847, Nationalmuseum, Stockholm, shown at the 1848 Salon), and Man with a Pipe (1848–49, Musée Fabre, Montpellier).

Trips to the Netherlands and Belgium in 1846–47 strengthened Courbet's belief that painters should portray the life around them, as Rembrandt, Hals and other Dutch masters had. By 1848, he had gained supporters among the younger critics, the Neo-romantics and Realists, notably Champfleury.

Courbet achieved his first Salon success in 1849 with his painting After Dinner at Ornans. The work, reminiscent of Chardin and Le Nain, earned Courbet a gold medal and was purchased by the state. The gold medal meant that his works would no longer require jury approval for exhibition at the Salon—an exemption Courbet enjoyed until 1857 (when the rule changed).