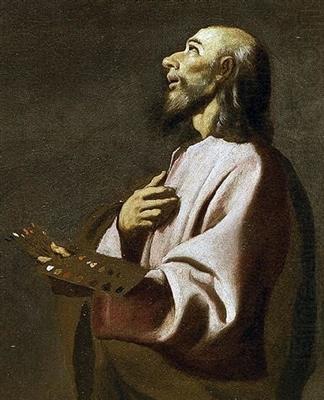 St. Luke as a Painter before Christ on the Cross, detail (Probable self-portrait) - Francisco Zurbaran

Francisco de Zurbarán (baptized November 7, 1598 – August 27, 1664) was a Spanish painter. He is known primarily for his religious paintings depicting monks, nuns, and martyrs, and for his still-lifes. Zurbarán gained the nickname Spanish Caravaggio, owing to the forceful, realistic use of chiaroscuro in which he excelled.

Zurbarán was born in 1598 in Fuente de Cantos, Extremadura; he was baptized on November 7 of that year. His parents were Luis de Zurbarán, a haberdasher, and his wife, Isabel Márquez. In childhood he set about imitating objects with charcoal. In 1614 his father sent him to Seville to apprentice for three years with Pedro Díaz de Villanueva, an artist of whom very little is known.

His first marriage, in 1617, was to María Paet who was nine years older. María died after the birth of their third child in 1624. In 1625 he married again to wealthy widow Beatriz de Morales. On January 17, 1626, Francisco de Zurbarán signed a contract with the prior of the Dominican monastery San Pablo el Real in Seville, agreeing to produce 21 paintings within eight months. Fourteen of the paintings depicted the life of Saint Dominic; the others represented Saint Bonaventura, Saint Thomas Aquinas, Saint Dominic, and the four Doctors of the Church. This commission established Zurbarán as a painter. On August 29, 1628, Francisco de Zurbarán was commissioned by the Mercedarians of Seville to produce 22 paintings for the cloister in their monastery. In 1629, the Elders of Seville invited Zurbarán to relocate permanently to the city, as his paintings had gained such high reputation that he would increase the reputation of Seville. He accepted the invitation and moved to Seville with his wife Beatriz de Morales, the three children from his first marriage, a relative called Isabel de Zurbarán and eight servants. In May 1639 his second wife, Beatriz de Morales, died.

Towards 1630 he was appointed painter to Philip IV, and there is a story that on one occasion the sovereign laid his hand on the artist's shoulder, saying "Painter to the king, king of painters". After 1640 his austere, harsh, hard-edged style was unfavorably compared to the sentimental religiosity of Murillo and Zurbarán's reputation declined. Beginning by the late 1630s, Zurbarán's workshop produced many paintings for export to South America.

On February 7, 1644, Francisco married a third time with another wealthy widow, Leonor de Torder. It was only in 1658, late in Zurbarán's life, that he moved to Madrid in search of work and renewed his contact with Velázquez. Popular myth has Zurbarán dying in poverty, but at his death the value of his estate was about 20,000 reales.

It is unknown whether Zurbarán had the opportunity to see the paintings of Caravaggio, only that his work features a similarly realistic use of chiaroscuro and tenebrism. The painter thought by some art historians to have had the greatest influence on his characteristically severe compositions was Juan Sánchez Cotán. Polychrome sculpture—which by the time of Zurbarán's apprenticeship had reached a level of sophistication in Seville that surpassed that of the local painters—provided another important stylistic model for the young artist; the work of Juan Martínez Montañés is especially close to Zurbarán's in spirit.