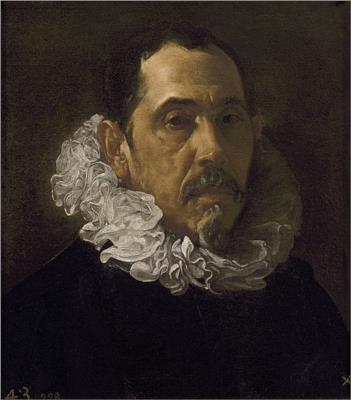 Francisco Pacheco del Río (bap. 3 November 1564 – 27 November 1644) was a Spanish painter, best known as the teacher and father-in-law of Diego Velázquez and Alonzo Cano, and for his textbook on painting that is an important source for the study of 17th-century practice in Spain. He is described by some as the "Vasari of Seville": voluble and didactic about his theories of painting and thoughts about painters, conventional and uninspired in his executions

He was born at Sanlúcar de Barrameda, son of Juan Pérez and wife Leonor del Río, and moved to Seville at a young age. He was a student of Luis Fernandez, and did much of his learning by copying works of the Italian masters. He visited Madrid and Toledo in 1611, studying the work of El Greco, then returned to Seville and opened an art school. He married a daughter of de Miranda and had one daughter, Juana Pacheco (1 June 1602 – 10 August 1660).

Pacheco's school emphasized the academically correct representation of religious subjects, not least because he was the official censor of Seville's Inquisition. His own work reflects those constraints; paintings such as the Last Judgment (convent of Santa Isabel) and Martyrs of Granada are monumental in scale but unimaginative in treatment.

Although Velázquez was a student in Pacheco's school for six years, and married Pacheco's daughter Juana on 23 April 1618, there is no trace of Pacheco's influence in the work of Velázquez besides in standards of decorum, such as depictions of the Immaculate Conception.