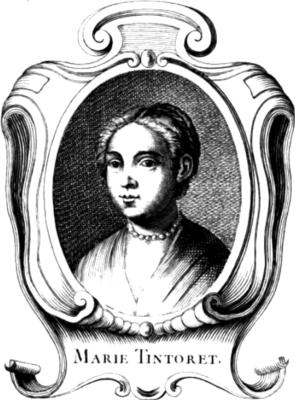 Marietta Robusti (1560? – 1590) was a Venetian painter of the Renaissance period. She was the daughter of Tintoretto and is sometimes referred to as Tintoretta.

The only known primary source for details of Marietta Robusti’s life is Carlo Ridolfi’s Life of Tintoretto, first published in 1642, although she is mentioned briefly in Raffaelo Borghini’s Il Riposo della Pitura e della Scultura of 1584. These two sources disagree on the year of her birth: according to Borghini, she was born in 1555, but Carlo Ridolfi indicates that she was born in 1560.

Marietta Robusti was probably born in 1560 and died when she was thirty during child birth, she lived in Venice all her life, she was the eldest daughter of the painter Jacopo Robusti, from whom she inherited her nickname, la Tintoretta (translated as "little dyer girl", after Jacopo’s father’s occupation as a tintore, or dyer). She is thus variously known as Marietta Robusti, Marietta Tintoretto, and la Tintoretta. She was followed by three brothers and four sisters.

Since conventions of the time dictated that women remained in the privacy of the domestic sphere and were not welcome in the public world of art production and sale, Robusti and her female contemporaries gained access to the art world through their artist fathers or brothers. Robusti's artistic training consisted of serving an apprenticeship in the collaborative environment of her father’s workshop, where she probably contributed to her father’s paintings with backgrounds and figure blocking, as was the usual distribution of labor in painting workshops of the time. Though Robusti's social and economic autonomy was no greater than other artisan women she had quite a following, changing the ideals of femininity within the arts. Her talents proceeded her even after her death, Carlo Ridolfi statied she was one of the most illustrious women of her time, even though having the same manner of skill as her father, would reason that they display "sentimental femininity, a womanly grace that is strained and resolute." While Robusti worked in her fathers studio it was also said she worked on altarpieces for the father as an assistant but were all put under the name of Tintoretto; despite evidence of individual achievement. Her achievements were buried under the success and fame of her father, brother and her short life; even after her death the decline in work produced by Tintoretto was reasoned away as grieve for his daughter, rather than the loss of a skillful assistant.

After Marietta Robusti's death she soon became a muse for Romantic painters; such as Léon Cogniet who produced Tintoretto Painting His Dead Daughter, following his influence both Karl Girardet and Eleuterio Pagliano in 1846. Lead by Philliphe Jeanron in 1857 with Tintoretto and His Daughter. The furthering troupe of women artists being transformed from creators to subjects for other male counterparts, it undermines her individuality and makes her a motif for male creativity, displaying a dying muse of quietly suffering femininity.

Evidence suggests that Marietta Robusti received no commissions for major religious works such as altarpieces or other church decorations, and that she was mainly a portraitist.