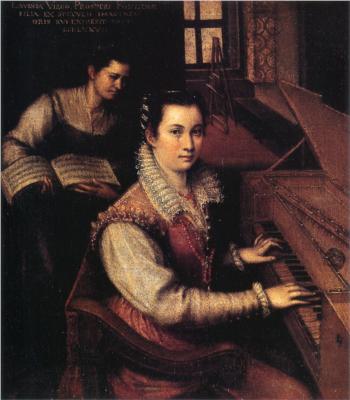 Self-Portrait at the Clavichord with a Servant, c. 1577

Lavinia Fontana was born in Bologna, the daughter of the painter Prospero Fontana, who was a prominent painter of the School of Bologna at the time and served as her teacher. Continuing the family business was typical at the time.

Her earliest known work, "Monkey Child", was painted in 1575 at the age of 23. Though this work is now lost, another early painting, Christ with the Symbols of the Passion, painted in 1576, is now in the El Paso Museum of Art. She would go on to paint in a variety of genres. Early in her career, she was most famous for painting upper-class residents of her native Bologna, notably noblewomen. Even as her gender may have hindered her career in a society less accustomed to female artists, it may have made women more comfortable sitting for her. Her relationships with female clients were often unusually warm; multiple women who sat for portraits painted by Fontana, such as the Duchess of Sora Constanza Sforza Boncompagni, later served as namesakes or godmothers for her children. She began her commercial practice by painting small devotional paintings on copper, which had popular appeal as papal and diplomatic gifts, given the value and lustre of the metal. In addition to portraits (the typical subject matter for women painters), she later created large scale paintings with religious and mythological themes which sometimes included female nudes. Fontana married Paolo Zappi (alternately spelled Paolo Fappi) in 1577. She gave birth to 11 children, though only 3 outlived her. After marriage, Fontana continued to paint to support her family. Zappi took care of the household and served as painting assistant to his wife, including painting minor elements of paintings like draperies. Fontana attended the University of Bologna, and completed a degree in 1580.

Fontana and her family moved to Rome in 1603 at the invitation of Pope Clement VIII. She gained the patronage of the Buoncompagni, of which Pope Gregory XIII was a member. Lavinia thrived in Rome as she had in Bologna and Pope Paul V himself was among her sitters. She was the recipient of numerous honors, including a bronze portrait medallion cast in 1611 by sculptor and architect Felice Antonio Casoni.

Some of her portraits, often lavishly paid for, have been wrongly attributed to Guido Reni. Chief among these are Venus; The Virgin lifting a veil from the sleeping infant Christ; and the Queen of Sheba visiting Solomon. Her self-portrait – in youth she was said to have been very beautiful – was perhaps her masterpiece; it belongs to Count Zappi of Imola, the family into which Lavinia married. Fontana's self-portraiture strikes a balance between presenting the artist as a distinguished lady and as a professional artist. This depiction of two coexisting roles was common for sixteenth-century women artists.