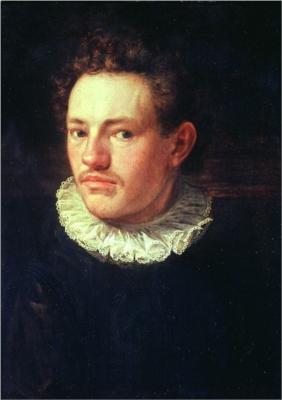 Hans von Aachen (1552 – 4 March 1615) was a German painter who was one of the leading representatives of Northern Mannerism.

Hans von Aachen was a versatile and productive artist who worked in many genres. He was successful as a painter of princely and aristocratic portraits, and further painted religious, mythological and allegorical subjects. Known for his skill in the depiction of nudes, his eroticized mythological scenes were particulzarly enjoyed by his principal patron, Emperor Rudolf II. These remain the works for which he is best known. He also painted a number of genre paintings of small groups of figures shown from the chest upwards, laughing, often apparently using himself and his wife as models. Von Aachen usually worked on a small scale and many of his works are cabinet paintings on copper.

The life and work of Hans von Aachen bear unique witness to the cultural transfer between North, South and Central Europe in the late 16th and early 17th centuries. After training in the tradition of Netherlandish Renaissance painting the artist moved to Italy in 1574, where he remained for about 14 years, mainly working in Venice. He returned in 1587 to his native Germany, where he took up residence in Munich in Bavaria. His final years were spent in Prague. The combination of the Netherlandish realism of his training and the Italian influences gained during his travels gave rise to his unique painting style.

His presence in the important art centres of the time, the wide distribution of prints after his designs and his congenial character all contributed to his international fame during his lifetime.

Hans von Aachen was born in Cologne. His surname is derived from the birthplace of his father, Aachen in Germany.

Hans von Aachen began painting in Germany as a pupil of the portrait painter Georg Jerrigh, who had trained in Antwerp. He probably joined the Cologne painters' guild before leaving for Italy around 1574. Like many northern artists of his time, such as the Flemish painter Bartholomeus Spranger, he then spent a long period in Italy. He lived in Venice from 1574 to 1587 where he became a member of the Netherlandish and German community of artists, printmakers and art dealers. He was active as a copyist and worked in the workshop of the Flemish painter and art dealer Gaspar Rem who was a native of Antwerp. Rem arranged for von Aachen to go through an apprenticeship with an artist referred to as Morett (or Moretto). This apprenticeship involved making copies of famous works in Venice's churches. Many of these copies were destined for the Northern-European art market. A contemporary art collector and dealer in Antwerp by the name of Hermann de Neyt had a collection of nearly 850 original and copied paintings, of which six were by Hans von Aachen (two of which copies after Raphael).


Von Aachen went to Rome in 1575. Here he studied the antique sculptures and the works of Italian masters. He became a member of the circle of northern artists active in Rome such as Otto van Veen, Joris Hoefnagel, the brothers Paul and Matthijs Bril, Hans Speckaert and Joseph Heintz the Elder. He was able to secure a commission for a Nativity for the Church of the Gesù, the mother church of the Society of Jesus (Jesuits) in Rome. In Florence in the years 1582–3 he established a reputation for his portraits, which led to commissions from the ruling Medici family. In 1585 he again settled in Venice.