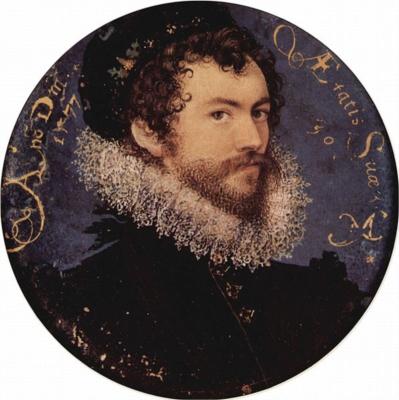 Nicholas Hilliard (c. 1547 – 7 January 1619) was an English goldsmith and limner best known for his portrait miniatures of members of the courts of Elizabeth I and James I of England. He mostly painted small oval miniatures, but also some larger cabinet miniatures, up to about ten inches tall, and at least two famous half-length panel portraits of Elizabeth. He enjoyed continuing success as an artist, and continuing financial troubles, for forty-five years. His paintings still exemplify the visual image of Elizabethan England, very different from that of most of Europe in the late sixteenth century. Technically he was very conservative by European standards, but his paintings are superbly executed and have a freshness and charm that has ensured his continuing reputation as "the central artistic figure of the Elizabethan age, the only English painter whose work reflects, in its delicate microcosm, the world of Shakespeare's earlier plays."

Nicholas was born in Exeter in 1547. He was the son of Richard Hilliard (1519–1594) of Exeter, Devon, England, a staunchly Protestant goldsmith who was Sheriff of Exeter in 1568 (aka Richard Hellyer), and Laurence, daughter of John Wall, a London goldsmith. He was one of four boys: two others became goldsmiths, and one a clergyman. Hilliard may have been a close relative of Grace Hiller (Hilliar), first wife of Theophilus Eaton (1590–1657), the co-founder of New Haven Colony in America.

He appears to have been attached at a young age to the household of the leading Exeter Protestant John Bodley, the father of Thomas Bodley who founded the Bodleian Library in Oxford. John Bodley went into exile on the accession of the Catholic Queen Mary I of England, and on 8 May 1557 Hilliard, then ten years old, was recorded in Geneva as one of an eleven-strong Bodley family group at a Calvinist service presided over by John Knox. Calvinism does not seem to have struck with Hilliard, but the fluent French he acquired abroad was later useful. Thomas Bodley, two years older, continued an intensive classical education under leading scholars in Geneva, but it is not clear to what extent Hilliard was given similar studies.

Hilliard painted a portrait of himself at the age of 13 in 1560 and is said to have executed one of Mary, Queen of Scots, when he was eighteen years old.

Hilliard apprenticed himself to the Queen's jeweller Robert Brandon (d. 1591), a goldsmith and city chamberlain of London, and Sir Roy Strong suggests that Hilliard may also have been trained in the art of limning by Levina Teerlinc during this period. She was the daughter of Simon Bening, the last great master of the Flemish manuscript illumination tradition, and became court painter to Henry VIII after Holbein's death. After his seven years' apprenticeship, Hilliard was made a freeman of the Worshipful Company of Goldsmiths in 1569. He set up a workshop with his younger brother John; another brother was also a goldsmith, and the youngest a clergyman. He married Brandon's daughter Alice (1556–1611) in 1576 and they had seven children.