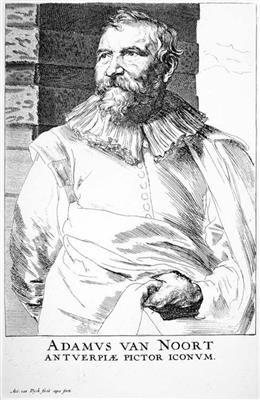 Etching by Anthony Van Dyck and engraving by an unknown printmaker

Adam van Noort (1561/62 – 1641) was a Flemish painter and draughtsman and one of the teachers of Peter Paul Rubens. Adam van Noort was mainly known for his history paintings but he also created some portraits. He was a designer for engravings for the Collaert family of printmakers and publishers.

Adam van Noort was born and died in Antwerp. He was the son of Lambert van Noort from Amersfoort and Katelijne van Broeckhuysen from Zwolle. His parents had established themselves in Antwerp where Lambert became a member of the local Guild of Saint Luke in 1549. His father was active primarily as a designer of stained-glass windows and engravings, an architect and, to a lesser extent, a painter. The family lived in poverty.

Van Noort served as dean of the Guild of Saint Luke from 1597 until 1602. He had problems with the Guild, which accused him of poor management of the accounts and misappropriation of materials of the Guild. The first conflict arose when van Noort used some unpainted panels in the Painter's Chamber of the Guild to create a composition he wanted to give as a present to the Guild in remembrance of his service as a deacon. Some other guild members objected to his actions and he was forced to substitute the panels and to ensure that they were painted within a year with a design approved by the Guild. The commission to paint the substituted panels did finally not go to van Noort but to Maerten de Vos. A second conflict with the Guild arose from the fact that he did not settle his accounts in time after he ceased being a deacon of the Guild.

Adam’s present-day fame largely rests on the fact that he was the teacher of two of the leading Flemish Baroque painters Peter Paul Rubens and Jacob Jordaens. Rubens only stayed for a little over a year and is not believed to have been influenced much by van Noort's training. Jordaens married van Noort’s daughter Elisabeth and would influence the style of his teacher and father-in-law. The total number of pupils of van Noort was around 35. This attests to the fact that in his time he was a very respected artist. He was also financially successful and was able to acquire several properties in Antwerp.

Van Noort lived to an old age but likely ceased practising as an artist aroun 1630. He made his last will on 31 August 1640 and died not long after September that year.