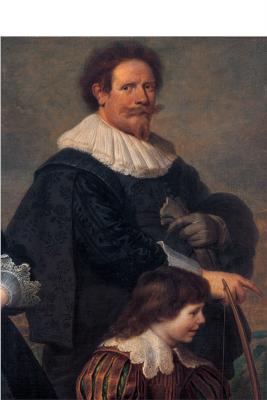 Self-portrait of the Artist with his Wife Suzanne Cock and their Children, detail - Cornelis de Vos

Cornelis de Vos (1584 – 9 May 1651) was a Flemish painter, draughtsman and art dealer. He was one of the leading portrait painters in Antwerp and is best known for his sensitive portraits, in particular of children and families. He was also successful in other genres including history, religious and genre painting. He was a regular collaborator with Rubens.

He was born in Hulst near Antwerp, now in the Dutch province of Zeeland. Little is known of his childhood. His father moved with his family to Antwerp in 1596. Cornelis and his younger brothers Paul and Jan (or Hans) studied under the little-known painter David Remeeus (1559–1626). In 1599 de Vos is mentioned as Remeeus’ pupil while on 8 May 1604 he is referred to as the chief assistant of Remeeus. On 29 April 1604, de Vos petitioned the Antwerp City Council for a pass that would allow him to travel. This was a necessary procedure for artists who wished to be trained abroad. It is not known whether the young artist actually left the city to study abroad. De Vos joined the Guild of Saint Luke in 1608 at the age of 24. When he became a citizen of Antwerp in 1616 he listed his occupation as an art dealer.

De Vos developed a busy practice as a painter, particularly of portraits. In 1620 he painted the portrait of the painter Abraham Grapheus (Royal Museum of Fine Arts Antwerp). He donated the work to the painters' chamber of the Guild of Saint Luke. De Vos received multiple commissions for family portraits from local patrons such as the wealthy merchant Joris Vekemans who ordered a portrait cycle of his family members in 1624. In 1627 he enjoyed royal patronage when 6 royal portraits were commissioned by respectively Philip IV of Spain, the Archdukes Albert and Isabella, Henri III of France, Henry IV of France and Marie de' Medici. He also worked on commissions from religious institutions. In 1628 he painted his only known landscape, a View of Hulst, which he donated to his home town where it is still displayed in the city hall.

During this period of busy activity as a painter de Vos continued to operate an art dealership. He also created works specifically for export, primarily to Spain.

Cornelis de Vos was one of the artists working on the decorations for the Joyous Entry into Antwerp of the new governor of the Habsburg Netherlands Cardinal-Infante Ferdinand in 1635. Rubens was in overall charge of this project. De Vos made decorative paintings after designs by Rubens. One of the hewn-out images that crowned the triumphal arch on the Meir, above the Huidevettersstraat, has been preserved and is attributed to the studio of de Vos (Jupiter and Juno, Royal Museum of Fine Arts Antwerp).