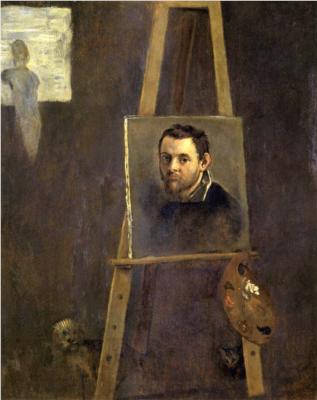 Self-portrait on an Easel in a Workshop - Annibale Carracci

Annibale Carracci (Italian pronunciation: [anˈnibale karˈrattʃi]; November 3, 1560 – July 15, 1609) was an Italian painter, active in Bologna and later in Rome. Along with his brothers, Annibale was one of the progenitors, if not founders of a leading strand of the Baroque style, borrowing from styles from both north and south of their native city, and aspiring for a return to classical monumentality, but adding a more vital dynamism. Painters working under Annibale at the gallery of the Palazzo Farnese would be highly influential in Roman painting for decades.

Annibale Carracci was born in Bologna, and in all likelihood was first apprenticed within his family. In 1582, Annibale, his brother Agostino and his cousin Ludovico Carracci opened a painters' studio, initially called by some the Academy of the Desiderosi (desirous of fame and learning) and subsequently the Incamminati (progressives; literally "of those opening a new way"). While the Carraccis laid emphasis on the typically Florentine linear draftsmanship, as exemplified by Raphael and Andrea del Sarto, their interest in the glimmering colours and mistier edges of objects derived from the Venetian painters, notably the works of Venetian oil painter Titian, which Annibale and Agostino studied during their travels around Italy in 1580–81 at the behest of the elder Caracci Lodovico. This eclecticism was to become the defining trait of the artists of the Baroque Emilian or Bolognese School.

In many early Bolognese works by the Carraccis, it is difficult to distinguish the individual contributions made by each. For example, the frescoes on the story of Jason for Palazzo Fava in Bologna (c. 1583–84) are signed Carracci, which suggests that they all contributed. In 1585, Annibale completed an altarpiece of the Baptism of Christ for the church of Santi Gregorio e Siro in Bologna. In 1587, he painted the Assumption for the church of San Rocco in Reggio Emilia.

In 1587–88, Annibale is known to have had travelled to Parma and then Venice, where he joined his brother Agostino. From 1589 to 1592, the three Carracci brothers completed the frescoes on the Founding of Rome for Palazzo Magnani in Bologna. By 1593, Annibale had completed an altarpiece, Virgin on the throne with St John and St Catherine, in collaboration with Lucio Massari. His Resurrection of Christ also dates from 1593. In 1592, he painted an Assumption for the Bonasoni chapel in San Francesco. During 1593-94, all three Carraccis were working on frescoes in Palazzo Sampieri in Bologna.

Based on the prolific and masterful frescoes by the Carracci in Bologna, Annibale was recommended by the Duke of Parma, Ranuccio I Farnese, to his brother, the Cardinal Odoardo Farnese, who wished to decorate the piano nobile of the cavernous Roman Palazzo Farnese. In November–December 1595, Annibale and Agostino traveled to Rome to begin decorating the Camerino with stories of Hercules, appropriate since the room housed the famous Greco-Roman antique sculpture of the hypermuscular Farnese Hercules.

Annibale meanwhile developed hundreds of preparatory sketches for the major work, wherein he led a team painting frescoes on the ceiling of the grand salon with the secular quadri riportati of The Loves of the Gods, or as the biographer Giovanni Bellori described it, Human Love governed by Celestial Love. Although the ceiling is riotously rich in illusionistic elements, the narratives are framed in the restrained classicism of High Renaissance decoration, drawing inspiration from, yet more immediate and intimate, than Michelangelo's Sistine Ceiling as well as Raphael's Vatican Logge and Villa Farnesina frescoes. His work would later inspire the untrammelled stream of Baroque illusionism and energy that would emerge in the grand frescoes of Cortona, Lanfranco, and in later decades Andrea Pozzo and Gaulli.