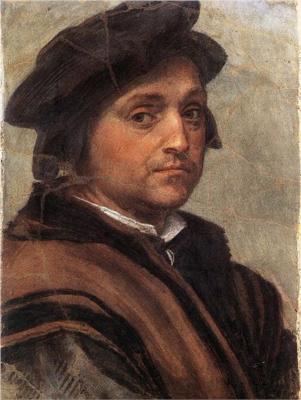 Andrea del Sarto (Italian: [anˈdrɛːa del ˈsarto]; 1486–1530) was an Italian painter from Florence, whose career flourished during the High Renaissance and early Mannerism. Though highly regarded during his lifetime as an artist senza errori ("without errors"), his renown was eclipsed after his death by that of his contemporaries, Leonardo da Vinci, Michelangelo and Raphael.

Andrea del Sarto was born Andrea d'Agnolo di Francesco di Luca di Paolo del Migliore in Florence on 16 July 1486. Since his father, Agnolo, was a tailor (Italian: sarto), he became known as "del Sarto" (meaning "tailor's son"). Since 1677 some have attributed the surname Vannucchi with little documentation. By 1494 Andrea was apprenticed to a goldsmith, and then to a woodcarver and painter named Gian Barile, with whom he remained until 1498. According to his late biographer Vasari, he then apprenticed to Piero di Cosimo, and later with Raffaellino del Garbo (Carli).

Andrea and an older friend Franciabigio decided to open a joint studio at a lodging together in the Piazza del Grano. The first product of their partnership may have been the Baptism of Christ for the Florentine Compagnia dello Scalzo, the beginning of a monochrome fresco series. By the time the partnership was dissolved, Sarto's style bore the stamp of individuality. According to the Encyclopædia Britannica, it "is marked throughout his career by an interest, exceptional among Florentines, in effects of colour and atmosphere and by sophisticated informality and natural expression of emotion."

From 1509 to 1514 the Servite Order employed Del Sarto, Franciabigio and Andrea Feltrini in a programme of frescoes at Basilica della Santissima Annunziata di Firenze. Sarto completed seven frescoes in the forecourt or atrium (the chiostro dei voti) before the Servite church, five of which illustrated the Life and miracles of Filippo Benizzi, a Servite saint who died in 1285 (canonized 1671). He executed them rapidly, depicting the saint healing a leper through the gift of his undertunic; predicting the bad end of some blasphemers; and restoring a girl possessed with a devil. The two final frescoes of the series depicted the healing of a child at the death bed of Filippo Benizzi and the curing of sick adults and children through his relic garment held at the church. All five frescoes were completed before the close of 1510. The original contract also required him to paint five scenes of the life and miracles of St Sebastian, but he told the Servites that he no longer wished to continue with the second cycle, most likely due to the low remuneration. The Servites convinced him to do two more frescoes in the forecourt, though of a different subject matter: a Procession of the Magi (or Adoration, containing a self-portrait) finished in 1511 and a Nativity of the Virgin. These paintings met with respect, the correctness of the contours being particularly admired, and earned for Sarto the nickname of "Andrea senza errori" (Andrea the perfect). Towards 1512 he painted an Annunciation in the monastery of S. Gallo and a Marriage of Saint Catherine (Dresden).