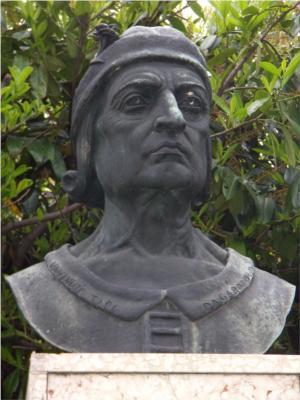 Benvenuto Tisi (or Il Garofalo) (1481 – September 6, 1559) was a Late-Renaissance-Mannerist Italian painter of the School of Ferrara. Garofalo's career began attached to the court of the Duke d'Este. His early works have been described as "idyllic", but they often conform to the elaborate conceits favored by the artistically refined Ferrarese court. His nickname, Garofalo, may derive from his habit of signing some works with a picture of a carnation (in Italian, garofano).

Born in Canaro near Ferrara, Tisi is claimed to have apprenticed under Panetti and perhaps Costa and was a contemporary, and sometimes collaborator with Dosso Dossi. In 1495 he worked at Cremona under his maternal uncle Niccolò Soriano, and at the school of Boccaccino, who initiated him into Venetian colouring. He may have spent three years (1509–1512), in Rome. This led to a stylized classical style, more influenced by Giulio Romano.

Invited by a Ferrarese gentleman, Geronimo Sagrato, to Rome, he worked briefly under Raphael in the decoration of the Stanza della Segnatura. From Rome family affairs recalled him to Ferrara; there Duke Alfonso I commissioned him to execute paintings, along with the Dossi, in the Delizia di Belriguardo and in other palaces. Thus the style of Tisi partakes of the Lombard, the Roman and the Venetian modes.

He painted extensively in Ferrara, both in oil and in fresco, two of his principal works being the "Massacre of the Innocents" (1519), in the church of S. Francesco, and his masterpiece "Betrayal of Christ" (1524). For the former he made clay models for study and a clay figure. He continued constantly at work until in 1550 blindness overtook him, painting on all feast-days in monasteries for the love of God. He had married at the age forty-eight, and died at Ferrara on the 6th (or 16th) of September 1559, leaving two children.

He was a friend of Giulio Romano, Giorgione, Titian and Ariosto; in a picture of "Paradise" he painted Ariosto between St Catherine and St Sebastian. In youth he was fond of lute-playing and also of fencing. He ranks among the best of the Ferrarese painters; his leading pupil was Girolamo da Carpi.

Even his least successful works retain, amid their frigid and porcelain quality, a harmony which marks Venetian colouring. His youthful works include the "Boar Hunt" in the Palazzo Sciarra. Later, the "Knight's Procession" in the Palazzo Colonna in Rome — gave promise of an Italianate Cuyp, less commonplace, more romantic, and more refined than the Dutch artist.

His youthful works include the Boar Hunt in the Palazzo Sciarra and the Virgin in the Clouds with Four Saints (1518) in the Gallerie dell'Accademia in Venice, considered one of his masterpieces. The Pietà (1527) in the Brera Gallery in Milan reveals an increasingly stylized treatment. The Madonna (1532) in the Modena Gallery is a charming picture; however, the large Triumph of Religion in the Atheneum at Ferrara has been described as a "bookish" affair, whose episodes are difficult to elucidate. Garofalo is one of the painters known and described by Vasari. From 1550 till his death Garofalo was blind.