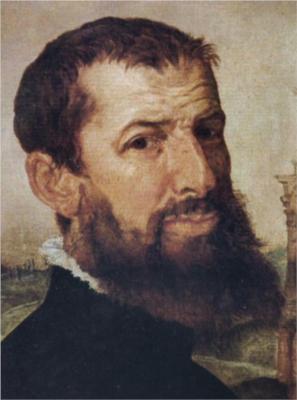 Maerten van Heemskerck or Marten Jacobsz Heemskerk van Veen (1 June 1498 – 1 October 1574) was a Dutch portrait and religious painter, who spent most of his career in Haarlem. He was a pupil of Jan van Scorel, and adopted his teacher's Italian-influenced style. He spent the years 1532–6 in Italy. He produced many designs for engravers, and is especially known for his depictions of the Wonders of the World.

Heemskerck was born in the village of Heemskerk, North Holland, halfway between Alkmaar and Haarlem. He was the son of a farmer called Jacob Willemsz. van Veen. According to his biography by Karel van Mander, he began his artistic training with the painter Cornelius Willemsz in Haarlem, but was recalled to Heemskerk by his father to work on the family farm. However, having contrived an argument with his father he left again, this time for Delft, where he studied under Jan Lucasz, before moving on to Haarlem, where he became a pupil of Jan van Scorel, learning to paint in his teacher's innovative Italian-influenced style.

Heemskerck then went to lodge at the home of the wealthy curate of the Sint-Bavokerk, Pieter Jan Foppesz (whose name van Mander writes as Pieter Ian Fopsen). They knew each other because Foppesz owned land in Heemskerk. The artist painted him in a now famous family portrait, considered the first of its kind in a long line of Dutch family paintings. His other works for Foppesz included two life size figures symbolising the Sun and the Moon on a bedstead, and a picture of Adam and Eve "rather smaller but (it is said) after living models". His next home was in the house of a goldsmith, Justus Cornelisz, on the edge of Haarlem.

Before setting off for Italy on a Grand Tour in 1532, Heemskerck painted a scene of St. Luke painting the Virgin for the altar of St. Luke in the Bavokerk. An inscription, incorporated into a tromp l'oeil label on the painting begins "This picture is a remembrance from its painter, Marten Heemskerck; he has here dedicated his labours to St Luke as a proof of regard to his associates in his profession, of which that saint is patron".

He travelled around the whole of northern and central Italy, stopping at Rome, where he had letters of introduction from van Scorel to the influential Dutch cardinal William of Enckenvoirt.

It is evident of the facility with which he acquired the rapid execution of a scene-painter that he was selected to collaborate with Antonio da Sangallo the Younger, Battista Franco and Francesco de' Rossi (Il Salviati) on the redecoration of the Porta San Sebastiano at Rome as a triumphal arch (5 April 1536) in honour of Charles V. Giorgio Vasari, who saw the battle-pieces which Heemskerk then produced, said they were well composed and boldly executed.

While in Rome where he made numerous drawings of classical sculpture and architecture, many of which survive in two sketchbooks now in the Kupferstichkabinett Berlin. He was to use them as source material throughout the rest of his career. Among these are the Capitoline Brutus, van Heemskerck being the first known artist to make a sketch of this now famous bust.