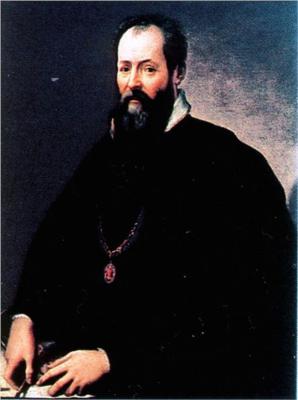 Giorgio Vasari (Italian: [ˈdʒordʒo vaˈzaːri]; 30 July 1511 – 27 June 1574) was an Italian painter, architect, writer, and historian, most famous today for his Lives of the Most Excellent Painters, Sculptors, and Architects, considered the ideological foundation of art-historical writing.

Vasari was born in Arezzo, Tuscany. Recommended at an early age by his cousin Luca Signorelli, he became a pupil of Guglielmo da Marsiglia, a skillful painter of stained glass. Sent to Florence at the age of sixteen by Cardinal Silvio Passerini, he joined the circle of Andrea del Sarto and his pupils Rosso Fiorentino and Jacopo Pontormo, where his humanist education was encouraged. He was befriended by Michelangelo, whose painting style would influence his own.

In 1529, he visited Rome where he studied the works of Raphael and other artists of the Roman High Renaissance. Vasari's own Mannerist paintings were more admired in his lifetime than afterwards. In 1547 he completed the hall of the chancery in Palazzo della Cancelleria in Rome with frescoes that received the name Sala dei Cento Giorni. He was consistently employed by members of the Medici family in Florence and Rome, and worked in Naples (for example on the Vasari Sacristy), Arezzo and other places. Many of his pictures still exist, the most important being the wall and ceiling paintings in the Sala di Cosimo I in the Palazzo Vecchio in Florence, where he and his assistants were at work from 1555, and the frescoes begun by him inside the vast cupola of the Duomo were completed by Federico Zuccari and with the help of Giovanni Balducci. He also helped to organize the decoration of the Studiolo, now reassembled in the Palazzo Vecchio. Among his other pupils or followers are included Sebastiano Flori, Bartolommeo Carducci, Domenico Benci, Tommaso del Verrocchio, Federigo di Lamberto (Federigo del Padovano), Niccolo Betti, Vittor Casini, Mirabello Cavalori (Salincorno), Jacopo Coppi (Jacopo di Meglio), Piero di Ridolfo, Stefano Veltroni of Monte Sansavino, Orazio Porta of Sansavino, Alessandro Fortori of Arezzo, Bastiano Flori of Arezzo, Fra Salvatore Foschi of Arezzo, and Andrea Aretino.

Aside from his career as a painter, Vasari was also successful as an architect. His loggia of the Palazzo degli Uffizi by the Arno opens up the vista at the far end of its long narrow courtyard. It is a unique piece of urban planning that functions as a public piazza, and which, if considered as a short street, is unique as a Renaissance street with a unified architectural treatment. The view of the Loggia from the Arno reveals that, with the Vasari Corridor, it is one of very few structures that line the river which are open to the river itself and appear to embrace the riverside environment.

In Florence, Vasari also built the long passage, now called Vasari Corridor, which connects the Uffizi with the Palazzo Pitti on the other side of the river. The enclosed corridor passes alongside the River Arno on an arcade, crosses the Ponte Vecchio and winds around the exterior of several buildings. It was once the home of the Mercado de Vecchio.