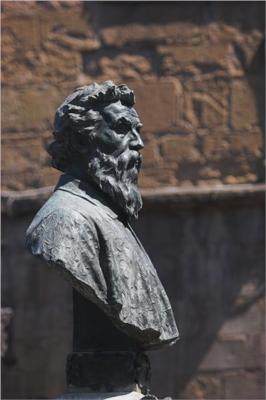 He was one of the most important artists of Mannerism. He is remembered for his skill in making pieces such as the Cellini Salt Cellar and Perseus with the Head of Medusa.

Benvenuto Cellini was born in Florence, in present-day Italy. His parents were Giovanni Cellini and Maria Lisabetta Granacci. They were married for eighteen years before the birth of their first child. Benvenuto was the second child of the family. The son of a musician and builder of musical instruments, Cellini was pushed towards music, but when he was fifteen, his father reluctantly agreed to apprentice him to a goldsmith, Antonio di Sandro, nicknamed Marcone. At the age of sixteen, Benvenuto had already attracted attention in Florence by taking part in an affray with youthful companions. He was banished for six months and lived in Siena, where he worked for a goldsmith named Fracastoro (unrelated to the Veronese polymath). From Siena he moved to Bologna, where he became a more accomplished flute player and made progress as a goldsmith. After a visit to Pisa and two periods of living in Florence (where he was visited by the sculptor Torrigiano), he moved to Rome, at the age of nineteen.

His first works in Rome were a silver casket, silver candlesticks, and a vase for the bishop of Salamanca, which won him the approval of Pope Clement VII. Another celebrated work from Rome is the gold medallion of "Leda and the Swan" executed for the Gonfaloniere Gabbriello Cesarino, and which is now in the Museo Nazionale del Bargello in Florence. He also took up the flute again, and was appointed one of the pope's court musicians.

In the attack on Rome by Charles III, Duke of Bourbon, Cellini's bravery proved of signal service to the pontiff. According to his own accounts, he himself shot and injured Philibert of Châlon, prince of Orange (allegedly Cellini also killed Charles III, Duke of Bourbon during the Siege of Rome). His bravery led to a reconciliation with the Florentine magistrates, and he soon returned to his hometown of Florence. Here he devoted himself to crafting medals, the most famous of which are "Hercules and the Nemean Lion", in gold repoussé work, and "Atlas supporting the Sphere", in chased gold, the latter eventually falling into the possession of Francis I of France.

From Florence he went to the court of the duke of Mantua, and then back to Florence. On returning to Rome, he was employed in the working of jewellery and in the execution of dies for private medals and for the papal mint. In 1529 his brother Cecchino killed a Corporal of the Roman Watch and in turn was wounded by an arquebusier, later dying of his wound. Soon afterward Benvenuto killed his brother's killer – an act of blood revenge but not justice as Cellini admits that his brother's killer had acted in self-defense. Cellini fled to Naples to shelter from the consequences of an affray with a notary, Ser Benedetto, whom he had wounded. Through the influence of several cardinals, Cellini obtained a pardon. He found favor with the new pope, Paul III, notwithstanding a fresh homicide during the interregnum three days after the death of Pope Clement VII in September 1534. The fourth victim was a rival goldsmith, Pompeo of Milan.