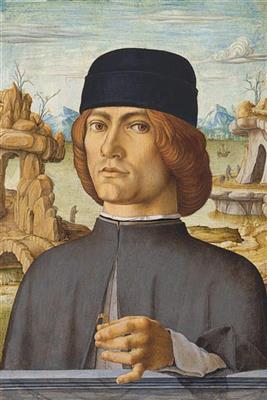 
The son of a stonemason in Ferrara, little is known about his early works, although it is known that he travelled outside of Ferrara in his late twenties or early thirties.


Cossa is best known for his frescoes. One of the first records we have of him is in 1456 when he was an assistant to his father, Cristofano del Cossa, at that time employed in painting the carvings and statues on the high altar in the chapel of the bishop's palace at Ferrara. One of his followers was Leonardo Scaletti of Faenza.


In conjunction with Cosimo Tura, Cossa is now known for fresco decoration of the summer pleasure villa/palazzo known as the Palazzo Schifanoia, located just outside the city gates. Together, they painted a series of the elaborate allegories around the themes of zodiacal signs and months of the year. These were only partially restored in the 20th century, and there are three that are reasonably assigned to Cossa. Of these, one of the most remarkable images is the horde of naked toddlers in the Allegory of May – Triumph of Apollo. Apparently a sign of springtime's prolific blossoming, the crowded rows of babies mass like a phalanx of infantile Rockettes.


The Allegory of April has a depiction of the trio of Graces, one of the earliest Post-classical representations of the naked intertwined dancers in painting. Sandro Botticelli's version in Primavera dates from 1482. See the 1501 version of the Three Graces (now at Chantilly). Assuming the date of death of Cossa is correct, this one must have been completed prior to the others.


Unhappy that he had been paid by the square foot for his work for Duke Borso and complaining he was being paid the same as the "worst dauber in Ferrara", Cossa left Ferrara for Bologna in 1470.


In Bologna he obtained many commissions under the patronage of the Bentivoglio family. Here he painted his two masterpieces: the Virgin and Child with two saints and a portrait of Alberto de' Catanei (1474) and fresco of the Madonna del Baracano, representing the Virgin and Child with portraits of Giovanni Bentivoglio and Maria Vinziguerra (1472).


He executed stained glass windows in Bologna, the best of which is a circular window, in the church of San Giovanni in Monte, representing St. John in Patmos. This bears his signature.


In the National Gallery of London there is a picture by him representing St. Vincent Ferrer. There is a fine profile portrait at Locko Park near Derby, said to represent Duke Ercole I of Ferrara. In the Dresden collection there is also an Annunciation that has, however, been attributed to Pollaiuolo.


Del Cossa features as one of the two protagonists in Ali Smith's novel How to Be Both, short-listed for the 2014 Man Booker Prize.


The stained glass window was revealed to be the final answer of the Great Google Earth Treasure Hunt.