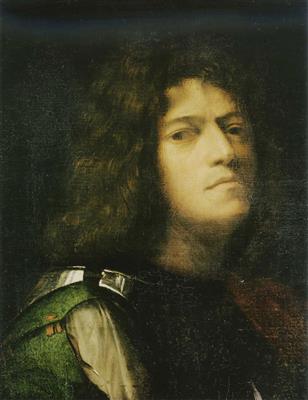 Giorgione (/ˌdʒɔːrdʒiˈoʊneɪ, -ni/, US: /ˌdʒɔːrˈdʒoʊni/; Italian: [dʒorˈdʒoːne]; born Giorgio Barbarelli da Castelfranco; c. 1477/8–1510) was an Italian painter of the Venetian school in the High Renaissance from Venice, whose career was ended by his death at a little over 30. Giorgione is known for the elusive poetic quality of his work, though only about six surviving paintings are affirmatively acknowledged to be his. The uncertainty surrounding the identity and meaning of his work has made Giorgione one of the most mysterious figures in European art.

Together with Titian, who was probably slightly younger, he founded the distinctive Venetian school of Italian Renaissance painting, which achieves much of its effect through colour and mood, and is traditionally contrasted with Florentine painting, which relies on a more linear disegno-led style.

What little is known of Giorgione's life is given in Giorgio Vasari's Lives of the Most Excellent Painters, Sculptors, and Architects. The painter came from the small town of Castelfranco Veneto, 40 km inland from Venice. His name sometimes appears as Zorzo. The variant Giorgione (or Zorzon) may be translated "Big George". It is unclear how early in boyhood he went to Venice, but stylistic evidence supports the statement of Carlo Ridolfi that he served his apprenticeship there under Giovanni Bellini; there he settled and rose to fame.

Contemporary documents record that his gifts were recognized early. In 1500, when he was only twenty-three (that is, if Vasari is correct about his age when he died), he was chosen to paint portraits of the Doge Agostino Barbarigo and the condottiere Consalvo Ferrante. In 1504, he was commissioned to paint an altarpiece in memory of another condottiere, Matteo Costanzo, in the cathedral of his native town, Castelfranco. In 1507, he received, at the order of the Council of Ten, partial payment for a picture (subject unknown) in which he was engaged for the Hall of the Audience in the Doge's Palace. From 1507 to 1508 he was employed, with other artists of his generation, to decorate with frescoes the exterior of the newly rebuilt Fondaco dei Tedeschi (or German Merchants' Hall) at Venice, having already done similar work on the exterior of the Casa Soranzo, the Casa Grimani alli Servi and other Venetian palaces. Very little of this work survives today.

Vasari mentions an important event in Giorgione's life, and one which influenced his work, his meeting with Leonardo da Vinci on the occasion of the Tuscan master's visit to Venice in 1500. All accounts agree in representing Giorgione as a person of distinguished and romantic charm, a great lover and a musician, given to express in his art the sensuous and imaginative grace, touched with poetic melancholy, of the Venetian existence of his time. They represent him further as having made in Venetian painting an advance analogous to that made in Tuscan painting by Leonardo more than twenty years before; that is, as having released the art from the last shackles of archaic rigidity and placed it in possession of full freedom and the full mastery of its means.