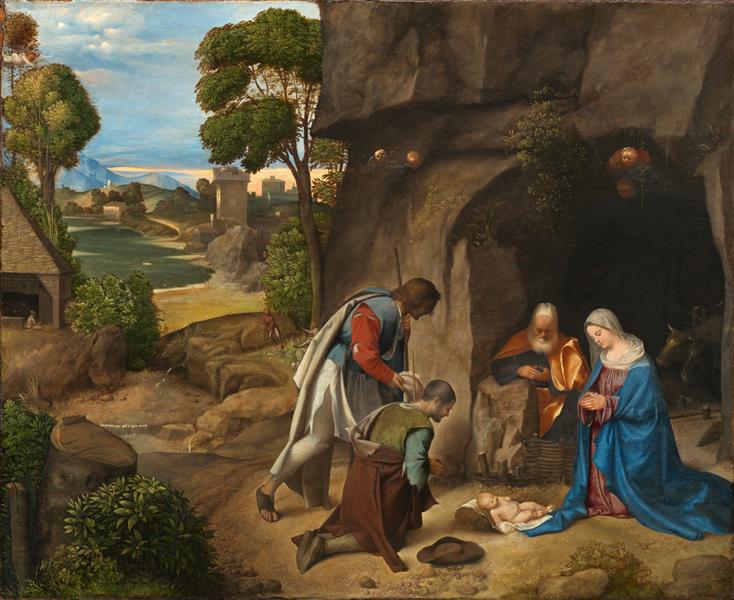 The Adoration of the Shepherds

The Adoration of the Shepherds, sometimes still known as the Allendale Nativity, after a former owner, is a painting by the Italian Renaissance painter Giorgione, completed in about 1505 to 1510. The attribution is now usual, although not universal; the usual other view is that it is an early Titian. It is certainly a Venetian painting of that period. It is displayed in the National Gallery of Art of Washington, D.C., United States.

A group of paintings is sometimes described as the "Allendale group", after the Allendale Nativity. This group includes another Washington painting, the Holy Family, and an Adoration of the Magi predella panel in the National Gallery, London. This group, now often expanded to include another Adoration of the Shepherds in Vienna, and sometimes further, are usually included (increasingly) or excluded together from Giorgione's oeuvre.

Giorgione portrayed the main scene on the right, in front of a dark grotto, while on the left is bright landscape crowned by trees. A sincere dramatic tension is obtained by the choice to place the kneeling shepherd pilgrims in the centre of the painting. The entire group of parents, child, and pilgrim form an anchored rectangle that forms a counterpoised focal point to the receding landscape on the left.

This work was probably completed by Giorgione while he was part of the workshop of Vincenzo Catena, a strict follower of Giovanni Bellini's style.

It was next owned by Claudius Tarral of Paris and sold at his sale at Christie's, London on 11 June 1847 (lot 55) as Adoration of the Shepherds by Giorgione. The sale featured 55 pictures and fetched £3,383. The Giorgione sold for 1,470 guineas (£1,544). This large sum relative to the sale total and the fact that it was the last lot cried indicates that it was the premier item of the sale.

Joseph Duveen concluded negotiations to acquire the Nativity from Lord Allendale on 5 August 1937. It was acquired by Duveen Brothers at, according to Duveen's colleague Edward Fowles, "a Giorgione price" ($315,000 and $5,000 to dealer Charles Ruck). Duveen's expert, art historian Bernard Berenson fervently believed the painting to be early Titian, and a battle of wills ensued. The Allendale Nativity ultimately caused the rupture between Lord Duveen and Berenson, ending one of the most influential relationships in modern art history. Duveen sold the painting, as a Giorgione, to Samuel Kress, the department-store magnate, for $400,000 in 1938. He displayed the Nativity in the window of his store on Fifth Avenue during the Christmas season of that year.