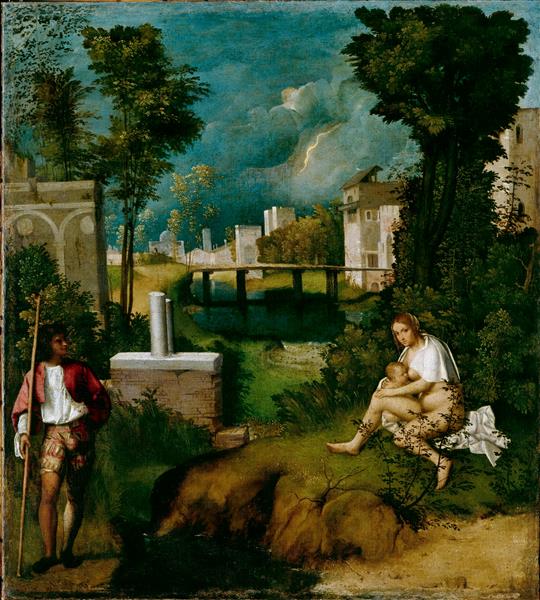 Apart from his larger commissioned works, most of what Giorgione painted was smaller paintings, designed for personal collectors to keep in their homes. This is one such piece, measuring 33 by 29 inches, commissioned by Gabriele Vendramin, a Venetian noble. It is said to be the first landscape in Western painting, and its symbolic implications are up to determination, as there have been many differing interpretations of its meaning. While some interpretations go so far as to indicate that the man and the woman represent Adam and Eve, the sucking babe Cain, and God in the form of lighting and the coming storm, others see no meaning in the work, and state that Giorgione had no particular story in mind while he was completing the work.

The Tempest (Italian La Tempesta) is a Renaissance painting by the Italian master Giorgione dated between 1506 and 1508. Originally commissioned by the Venetian noble Gabriele Vendramin, the painting is now in the Gallerie dell'Accademia of Venice, Italy. Despite considerable discussion by art historians, the meaning of the scene remains elusive.

On the right a woman sits, suckling a baby. The woman has been described as a "Gypsy" since at least 1530, and in Italy, the painting is also known as La Zingara e il Soldato ("The Gypsy woman and the soldier"), or as La Zingarella e il Soldato ("The Gypsy girl and the soldier"). Her pose is unusual - normally the baby would be held on the mother's lap; but in this case the baby is positioned at the side of the mother, so as to expose her pubic area. A man, possibly a soldier, holding a long staff or pike, stands in contrapposto on the left. He smiles and glances to the left, but does not appear to be looking at the woman. Art historians have identified the man alternatively as a soldier, a shepherd, a gypsy, or a member of a club of unmarried men. X-rays of the painting have revealed that in the place of the man, Giorgione originally painted another female nude. One may also note the stork on the rooftop on the right. Storks sometimes represent the love of parents for their children.

The painting's features seem to anticipate the storm. The colors are subdued and the lighting soft; greens and blues dominate. The landscape is a not a mere backdrop, but forms a notable contribution to early landscape painting. The painting has a 'silent' atmosphere which continues to fascinate modern viewers.

There is no contemporary textual explanation for The Tempest, and ultimately, no definitive reading or interpretation. To some it represents the flight into Egypt; to others, a scene from classical mythology (possibly Paris and Oenone; or Iasion and Demeter) or from an ancient Greek pastoral novel. According to the Italian scholar Salvatore Settis, the desert city would represent the Paradise, the two characters being Adam and Eve with their son Cain: the lightning, as in ancient Greek and Hebrew times, would represent God who has just ousted them from Eden. Others have proposed a moral allegorical reading, or concluded that Giorgione had no particular subject in mind.

This was Lord Byron's favorite painting because the ambiguity of both its subject matter and symbolism allowed viewers to make up their own tale.

Jan Morris wrote that the picture changed the way she looked at painting. She was fascinated with the subject and "its sense of permanently suspended enigma", and calls it a "haunted picture", inhabited by the actual presence of the artist.

Czech poet Ladislav Novák wrote a poem called Giorgione's Tempest where Meister Eckhart explains its symbolism in a wealthy man's study. According to him, the man is a shepherd who represents Giorgione and the lady is a woman the painter loves, without hoping his love will be requited.