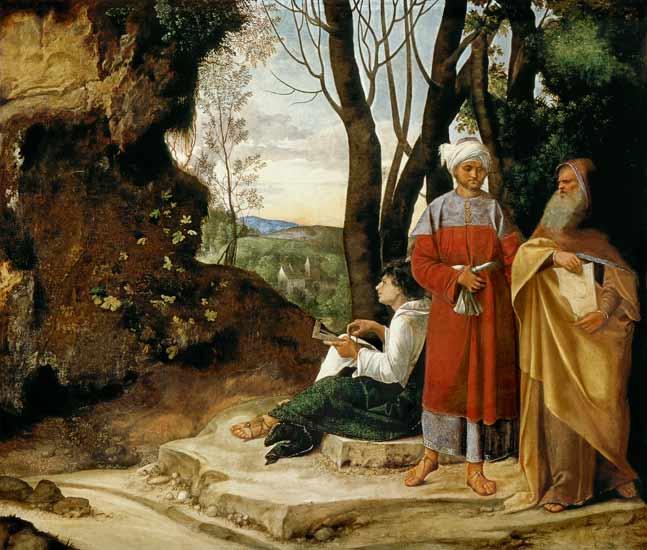 This painting was commissioned by a Venetian merchant, Taddeo Contarini, who had an interest in the occult and alchemy. The painting depicts three philosophers: one young, one middle aged, and one old. According to one interpretation, the three figures are said to represent the three stages of human thought: the Renaissance, the age of Muslim academic expansion, and the Middle Ages. Other interpretations include that the philosophers are standing outside Plato’s cave, or that they are the Three Magi, outside the tomb of Jesus. One of Giorgione’s last works before his death, it is said to have been finished by Sebastiano del Pombo, a Venetian artist who was highly influenced by Giorgione’s style.

The Three Philosophers is an oil painting on canvas attributed to the Italian High Renaissance artist Giorgione. It shows three philosophers - one young, one middle-aged, and one old. The work was commissioned by the Venetian noble Taddeo Contarini, a Venetian merchant with an interest in the occult and alchemy. The Three Philosophers was finished one year before the painter died. One of Giorgione’s last paintings, it is now displayed at the Kunsthistorisches Museum in Vienna. The painting was finished by Sebastiano del Piombo.

The Three Philosophers was finished around 1509, and the current name of the work derives from a writing of Marcantonio Michiel, (1484–1552) who saw it just some years after in a Venetian villa. The three figures portrayed are allegorical: an old bearded man, possibly a Greek philosopher; an Arab philosopher; and a sitting young man, enclosed within a natural landscape. In the background is a village with some mountains, the latter marked by a blue area whose meaning is unknown. The young man is observing a cave on the left of the scene, and apparently measuring it with some instruments. Since the end of the 19th century scholars and critics rejected on various grounds the earlier view that it is a representation of the three Magi gathered before Jesus' grotto.

Various interpretations about Giorgione's picture have been proposed. The Three Philosophers, the old man, the Arab figure and the young man, could be a depiction of transmission of knowledge, the Transmission of the Classics from the ancient Greeks philosophy through the Arab translations, that became actual again around the Italian Renaissance. The old man is representing a Greek philosopher, such as Plato or Aristotle, whose writings have been copied and transmitted through the Arab philosophers to the Italian Renaissance. The Arab philosopher is possibly representing the polyhistor Avicenna or Averroes, both Arab philosophers and Arab scientists from the Islamic Golden Age.

The young man could be seen as the new Renaissance science with roots in the past, looking into the empty darkness of the cave, symbolizing the yet undiscovered secrets. The cave might also symbolize the philosophic concept of Plato's Cave

New hypotheses about the figures, their identities and the symbolism are still currently advanced. In a note about the picture G. C. Williamsom, early in the 20th century, stated that "It represents Evander and his son Pallas showing to Aeneas the future site of Rome". The possibility that the three men are King Solomon, Hiram I, King of Tyre, and Hiram Abiff has been advanced by Neil K. MacLennan and Ross S. Kilpatrick.

It has been suggested that the figure of the young man can be inscribed neatly in a right-angled triangle for which the Pythagorean theorem applies. Karin Zeleny, relying on a reading of Polydore Vergil has proposed that the philosophers are the teachers of Pythagoras - Pherecydes of Syros and Thales. Thales has been painted as a Jew, while Pherecydes was mistakenly believed to be a Syrian. This interpretation was modified by Frank Keim who claimed that the older philosopher is in fact Aristarchus of Samos