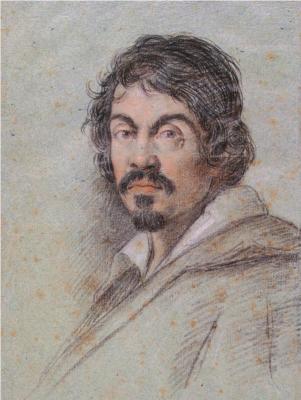 Caravaggio was a master Italian painter, father of the Baroque style, who led a tumultuous life that was cut short his by his fighting and brawling. As a child and art student, he trained in Milan under a teacher who had been taught by the great Italian painter Titian himself, and who exposed him to the great works of Leonardo de Vinci and the Lombard artists. He moved to Rome in 1592, after certain quarrels resulted in the wounding of a police officer. Rome at the time was in a period if great expansion, and the many churches and palaces being built were all in need of paintings to decorate the walls. Caravaggio also moved to Rome during the Counter-Reformation, in which the Roman Catholic Church tried to stem the rising tide of Protestantism, and was commissioning many works to elevate the social status of the Church.

He arrived in Rome starving and destitute, and immediately began working for Giuseppe Cesari, the favorite painter of the Pope, and throughout the end of the 16th century his reputation as a great painter grew. His big break came in 1599, when he was commissioned to paint the Contarelli Chapel in Rome, which was finished in 1600. after which he began receiving many commissions, both public and private. Some of his works, being controversial in subject matter (his unacceptably vulgar realistic style) and models (one of his favorite models for the Virgin Mary was a prostitute), and some of his works were returned to be painted over or fixed. Others were returned entirely, but Caravaggio always had a public willing to snatch up any painting he produced.

As a street brawler, his police records and court proceedings fill many pages. In 1606, he killed a young man in a street fight and fled to Naples, where he was protected by the Colonna family. In 1608, he was arrested and put in jail for another brawl in Naples, but he managed to escape. In his flight from the law, he traveled through Milan, Syracuse, Sicily, Palermo, Malta, and Messina, continually receiving commissions. He returned to Naples to live with the Colonna family and seek a pardon from the Pope, and in 1606, an assassination attempt was made of his life, leaving his face permanently disfigured.

In the summer of 1610, he took a boat from Naples to Rome, along with three paintings as an offering of peace, seeking a pardon from the Pope. He never arrived at his destination, having mysteriously died along the way. Although his artistic technique fathered the Baroque style, he was quickly forgotten after his death. It was not until the 1920’s that his body of work began to be fully received and appreciated.

Michelangelo Merisi (Michele Angelo Merigi or Amerighi) da Caravaggio (/ˌkærəˈvædʒioʊ/, US: /-ˈvɑːdʒ-/; Italian pronunciation: [mikeˈlandʒelo meˈriːzi da (k)karaˈvaddʒo]; 28 September 1571 – 18 July 1610) was an Italian painter active in Rome, Naples, Malta, and Sicily from the early 1590s to 1610. His paintings combine a realistic observation of the human state, both physical and emotional, with a dramatic use of lighting, and they had a formative influence on Baroque painting.

Caravaggio employed close physical observation with a dramatic use of chiaroscuro that came to be known as tenebrism. He made the technique a dominant stylistic element, darkening shadows and transfixing subjects in bright shafts of light. Caravaggio vividly expressed crucial moments and scenes, often featuring violent struggles, torture and death. He worked rapidly, with live models, preferring to forego drawings and work directly onto the canvas. His influence on the new Baroque style that emerged from Mannerism was profound. It can be seen directly or indirectly in the work of Peter Paul Rubens, Jusepe de Ribera, Gian Lorenzo Bernini, and Rembrandt, and artists in the following generation heavily under his influence were called the "Caravaggisti" or "Caravagesques", as well as tenebrists or tenebrosi ("shadowists").

Caravaggio trained as a painter in Milan before moving in his twenties to Rome. He developed a considerable name as an artist, and as a violent, touchy and provocative man. A brawl led to a death sentence for murder and forced him to flee to Naples. There he again established himself as one of the most prominent Italian painters of his generation. He traveled in 1607 to Malta and on to Sicily, and pursued a papal pardon for his sentence. In 1609 he returned to Naples, where he was involved in a violent clash; his face was disfigured and rumours of his death circulated. Questions about his mental state arose from his erratic and bizarre behavior. He died in 1610 under uncertain circumstances while on his way from Naples to Rome. Reports stated that he died of a fever, but suggestions have been made that he was murdered or that he died of lead poisoning.

Caravaggio's innovations inspired Baroque painting, but the Baroque incorporated the drama of his chiaroscuro without the psychological realism. The style evolved and fashions changed, and Caravaggio fell out of favor. In the 20th century interest in his work revived, and his importance to the development of Western art was reevaluated. The 20th-century art historian André Berne-Joffroy stated, "What begins in the work of Caravaggio is, quite simply, modern painting."

Caravaggio (Michelangelo Merisi or Amerighi) was born in Milan, where his father, Fermo (Fermo Merixio), was a household administrator and architect-decorator to the Marchese of Caravaggio, a town not far from the city of Bergamo. His mother, Lucia Aratori (Lutia de Oratoribus), came from a propertied family of the same district. In 1576 the family moved to Caravaggio (Caravaggius) to escape a plague that ravaged Milan, and Caravaggio's father and grandfather both died there on the same day in 1577. It is assumed that the artist grew up in Caravaggio, but his family kept up connections with the Sforzas and with the powerful Colonna family, who were allied by marriage with the Sforzas and destined to play a major role later in Caravaggio's life.