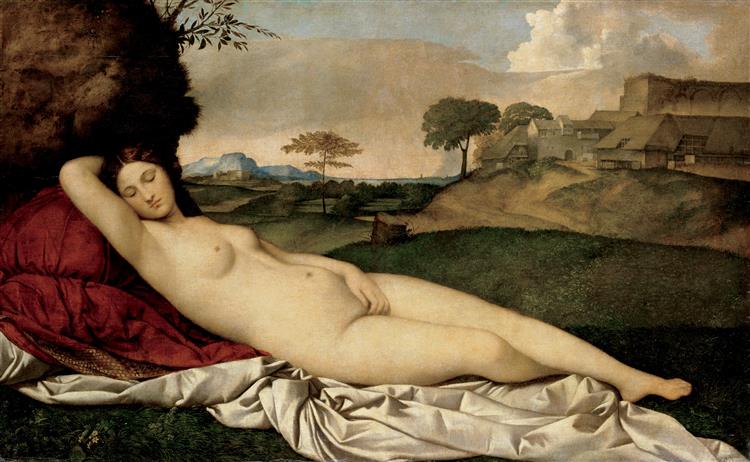 The Venetian School refers to the distinctive art that developed in Renaissance Venice beginning in the late 1400s, and which, led by the brothers Giovanni and Gentile Bellini, lasted until 1580. It's also called the Venetian Renaissance, and its style shares the Humanist values, the use of linear perspective, and naturalistic figurative treatments of Renaissance art in Florence and Rome. The second, related use of the term is the Venetian School of Painting, which beginning in the Early Renaissance lasted until the 18th century, and includes artists like Tiepolo, associated with the Rococo and Baroque movements, as well as Antonio Canaletto, known for his painting of Venetian cityscapes, and Francesco Guardi.

While the Venetian School was informed by the innovations of Renaissance masters like Andrea Mantegna, Leonardo da Vinci, Donatello, and Michelangelo, its style reflected the roots of the very distinct culture and society of the Venice city-state. An emphasis on rich color permeated creation, bringing the atmosphere of the area and its people alive in a visual representation of the time. As art historian Evelyn March Phillipps wrote, "Venetian color, when it comes into its kingdom, speaks for a whole people, sensuous and of deep feeling, able for the first time to utter itself in art."

Venice was known throughout Italy as "the serene city" due to its prosperity. Because of its geographical location on the Adriatic Sea, Venice had become a vital hub for trade, linking the West to the East. As a result the city-state was worldly and cosmopolitan, emphasizing the pleasures and riches of life, rather than driven by religious dogma, and proud of its independence and the stability of its government. The first Doge or Duke to rule Venice was elected in 697, and subsequent rulers were also elected by the Great Council of Venice, a parliament made of aristocrats and wealthy merchants. Magnificence, entertaining spectacles, and lavish feasts marked by carnivals that went on for weeks, defined Venetian culture, and became part of its joyous artistic sensibility.

Unlike Florence and Rome, which were under the sway of the Catholic Church, Venice was primarily associated with the Byzantine Empire, centered in Constantinople that ruled Venice in the 6th and 7th centuries. As a result, Venetian art was strongly influenced by the Byzantine use of bright colors and gold in church mosaics and Venetian architecture was informed by the Byzantine use of domes, arches, and multi-colored stone, inspired in part by the Islamic architecture of the Middle East.

By the mid-1400s the city was a rising power in Italy, and Renaissance artists like Andrea Mantegna, Donatello, Andrea del Castagno, and Antonello da Messina visited or lived in Venice for extended periods of time. The Venetian School style synthesized Byzantine color and golden light with the Renaissance innovations of these artists.

Andrea Mantegna first introduced the linear perspective, naturalistic figurative treatment, and classical proportionality that defined Renaissance art to Venetian artists as he worked in nearby Padua, his native town, on his Stories of St. James (1448-1457). His work was to profoundly influence Jacopo Bellini who became one of the first Venetian artists to employ linear perspective, and taught the technique to his sons, Gentile and Giovanni, later leaders of the Venetian School. A lifelong artistic and familial connection developed, as Mantegna married one of Jacopo's daughters. Mantegna's influence can be seen in Giovanni Bellini's The Agony in the Garden (c.1459-1465) referencing Mantegna's The Agony in the Garden (c.1458-1460), both paintings based upon a drawing by Jacopo Bellini.

Antonello da Messina worked in Venice from 1475-1476 and had a noted impact on Giovanni Bellini's adoption of oil painting and emphasis on portraiture. Credited with introducing oil painting to Italy by Giorgio Vasari, Antonello first encountered the art of the Northern European Renaissance while he was a student in Naples. As a result, his works were noted for their synthesis of Italian Renaissance and Northern European principles and influenced the development of the Venetian School's distinctive style.

Pioneering oil painting in Venice, Giovanni Bellini has been called the "Father of Venetian painting." Both he and his older brother Gentile were renowned, making the Bellini family workshop the most popular and celebrated in Venice. Important early commissions by the Bellini brothers were primarily religious subjects like Gentile's Procession of the True Cross (c.1496). Giovanni Bellini was particularly popular for his treatments of the Madonna and Child, a subject for which he had a deep affinity, and his depictions combined a kind of devotional gravity with a sense of charm and delight in the light and color of the world itself. However, it was Giovanni's emphasis on depicting natural light, and synthesizing Renaissance principles with Venetian color, that made him the leader of the Venetian School.

By the early 1480's Giovanni Bellini, shaking off the influence of Mantegna, had mastered oil painting as seen in his Transfiguration of Christ (c. 1480). He pioneered the Venetian School's emphasis on portraying natural light and atmosphere by employing color and tonal gradations. His Doge Leonardo Loredan (1501) established the Venetian School's stylistic treatment of portraiture and the importance of the genre in Venice. In later works, he turned to mythological subjects, like his Feast of the Gods (1504), which established a new genre of painting. Writing from Venice in 1506, Albrecht Dürer described Bellini as "the best painter of all." He was also a noted teacher, as both Giorgione and Titian, subsequent leaders of the movement, were trained in his workshop.

The Venetian School's groundbreaking emphasis on colorito, or using color to create forms, made it distinct from the Florentine School's emphasis on disegno, or drawing the forms then filling in the color. This resulted in works of revolutionary dynamism, unparalleled richness, and distinct psychological expression.

Artists in Venice painted primarily in oils, first on wood panels, then pioneering the use of canvas, which was better suited to the humid climate of the city, and emphasized the play of naturalistic light and atmosphere and dramatic, sometimes theatrical, human movement. Portraiture was revitalized during this time as artists sought a naturalistic treatment of their subjects that simultaneously conveyed their social importance. They focused not on the idealized role of a person, but their psychological complexity, as seen in Titian's Portrait of Pope Paul III (c. 1543). These portraits also started utilizing more of the figure in the painting, rather than just the upper bust and head.

The Venetian School declined around 1580, in part due to the impact that the plague had upon the city as it lost a third of its population by 1581, and in part due to the deaths of the last living masters, Veronese and Tintoretto. Both artists' later works, emphasizing expressive movement rather than classical proportions and figurative naturalism, had some influence upon the development of the Mannerists that subsequently dominated Italy and spread throughout Europe.

However, the Venetian School's emphasis on color, light, and delight in sensory life, as seen in the works of Titian, also created a contrast with Mannerism's more cerebral approach, and informed the Baroque works of Caravaggio and Annibale Carracci. The Venetian School had an even greater influence beyond Venice, as kings and aristocrats from throughout Europe avidly collected the works. Artists in Antwerp, Madrid, Amsterdam, Paris, and London, including Rubens, Anthony van Dyck, Rembrandt, Poussin, and Velázquez, were widely influenced by Venetian art. The story goes that Rembrandt, when told as a young artist to visit Italy, replied that it wasn't necessary, because "it was easier to see Italian Renaissance art in Amsterdam than to travel from town to town in Italy itself." That influence has continued into the modern era as artists like Francis Bacon and Chris Ofili have noted Titian's influence.