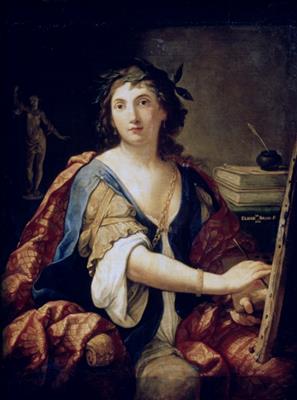 Self-Portrait as Allegory of Painting (1658)

Elisabetta Sirani (8 January 1638 – 28 August 1665) was an Italian Baroque painter and printmaker who died in unexplained circumstances at the age of 27. She was a pioneering female artist in early modern Bologna, who established an academy for other women artists.


Elisabetta Sirani was born in Bologna on 8 January 1638, the first of four children of Margherita and Giovanni Andrea Sirani. Sirani was born into an artistic family and was first trained in her father's studio. Her father was a painter of the School of Bologna and was a pupil of Guido Reni and an art merchant. Her biography is included in Carlo Cesare Malvasia’s two-volume Felsina pittrice: vite de’pittori bolognesi, or Lives of the Bolognese Painters, first published in 1678. Malvasia was personally acquainted with the Sirani family and actually took credit for recognizing Elisabetta's talent and persuading her father to train her as an artist, although this was likely self-aggrandizing. There is evidence that Sirani's father was not inclined, at first, to teach his daughter the way of Bolognese painting. She picked up his technique nonetheless and became one of the most renowned painters in Bologna, as a cult grew around her as the female reincarnation for Guido Reni. According to some scholars, she overshadowed both her father and two sisters, who were also painters. Throughout his biography of Sirani, Malvasia praises the originality of her compositions, her style of drawing, her fast manner of working and her professionalism, contrasting her with Lavinia Fontana, an earlier Bolognese woman painter whom he describes as timid.


When, by 1654, Giovanni Andrea Sirani became incapacitated by gout Elisabetta began running her family's workshop. Elisabetta Sirani was at this point the family's primary breadwinner. Between her students' fees and portrait commissions, she was able to support the family. Her studio was highly successful, partially due to the progressive atmosphere of Bologna, where women artists were accepted and celebrated.


Elisabetta Sirani died suddenly in August 1665, in Bologna. Her death was considered suspicious and a maidservant, Lucia Tolomelli, was charged with poisoning the artist and put on trial. It was thought suspicious because Tolomelli had requested to end her service to the family only days before Sirani's death. Giovanni Andrea Sirani withdrew the charges soon after the trial. Laura Ragg comments that Sirani died at “an age regarded as young indeed for death, but hopelessly late for marriage.” Malvasia attributed her death to love-sickness because Sirani never married. Her actual cause of death was most likely the onset of peritonitis after a ruptured peptic ulcer. This may have been the result of the intense stress she was submitted to after she was charged with providing for her entire household.


Sirani was given an elaborate funeral which included an enormous catafalque with a life-sized sculpture of the artist (illustrated in Malvasia's biography), orations and music composed in her honor by Bologna's most prominent citizens, and she was buried in the Basilica of San Domenico, Bologna, in the same tomb as her father's teacher, Guido Reni. Sirani's public funeral is regarded by some, including Laura Ragg as a eulogy to Bologna, the city that gave birth to Sirani, considered a precocious and prolific artist by her contemporaries. Sirani was described by a poet as the Lamented Paintbrush. Malvasia suggests that it was not poisoning but a condition that arose spontaneously in the body of a “vivacious and spirited woman, concealing to the highest degree her craving for a perhaps coveted husband denied to her by her father.” A city official at the time wrote that “She is mourned by all. The ladies especially whose portraits she flattered, cannot hold their peace about it. Indeed it is a great misfortune to lose such great artist in so strange a manner.” The ostentatious and elaborate funeral she received reflects the high esteem she was held in by her contemporaries and indeed her international fame.