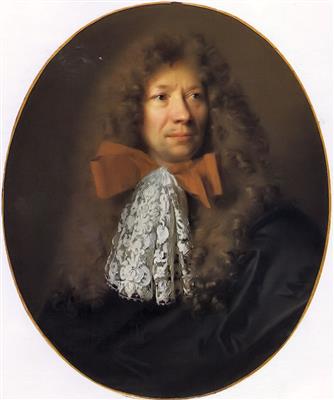 Adam Frans van der Meulen or Adam-François van der Meulen (11 January 1632 – 15 October 1690) was a Flemish painter and draughtsman who was particularly known for his scenes of military campaigns and conquests. Snayers also painted portraits, hunting scenes, paintings of chateaux and landscapes. He created designs for prints and cartoons for tapestries.

He worked in the service of the French king Louis XIV of France for whom he painted his victories, his new possessions and portraits. He was instrumental in building the propagandistic image of the French king as the 'Sun King'. His battle scenes had an important influence on the development on the genre of military painting in France.

Adam Frans van der Meulen was born in Brussels where he was baptized on 11 January 1632. He was the eldest of the seven children of Pieter van der Meulen and his second wife Maria van Steenwegen. His father was a respected notary. He was registered on 5 March 1651 at the Brussels Guild of Saint Luke as the pupil of Peter Snayers. Snayers was a painter from Antwerp who had moved to Brussels to work for the court. He specialized in pictures of battles, attacks on convoys and civilians and hunting scenes. Van der Meulen became a master of the Guild of Saint Luke in Brussels on 5 March 1651.

Van der Meulen's earliest works dealt with the same subject matter as those of his master Snayers, in particular cavalry skirmishes. He was also known for depicting courtly retinues mounted on their horses. His reputation for this type of scene as well as his skill in the painting of horses reached France. This led to the artist being called to Paris where he entered into the service of Louis XIV on 1 April 1664. Jean-Baptiste Colbert, the powerful surintendant des Bâtiments, Arts et Manufactures (Superintendent of Buildings, Arts and Manufactures) and later minister of finance, is believed to have been behind the royal appointment of van der Meulen. Colbert had been charged with immortalizing the military successes of Louis XIV. To achieve this propagandistic purpose, he had come up with the idea to create a series of tapestries that would show the heroic deeds of the king.

The court painter (Premier peintre du roi) Charles Le Brun had been put in charge of the Gobelins Manufactory, the royal tapestry works newly created in 1663, and was officially appointed its director on 8 March 1663. To realize Colbert's project of a series of tapestries on the king's military campaigns, Le Brun sought to surround himself with a team of painters who would be capable of translating his ideas into tapestries and van der Meulen was recruited to assist Le Brun in this project. Van der Meulen’s varied skills were particularly appreciated for this purpose. Van der Meulen's reputation as a skilled painter of horses has been cited as one of the reasons why he was solicited to work in France.