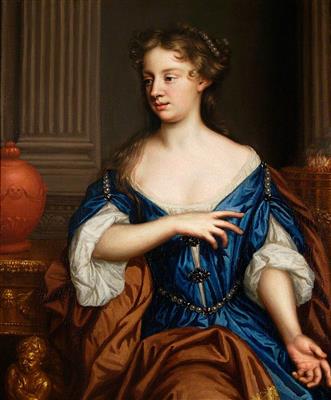 Mary Beale (née Cradock; late March 1633 – 8 October 1699) was one of the most successful professional female Baroque-era portrait painters of the late 17th century due to her perseverance of her business. Praised by Richard Gibson and court painter Peter Lely, she is considered as successful as Joan Carlile. Joan Carlile was also an English portrait painter, who was one of the first women to practise painting professionally. Mary Beale managed to be the financial provider for her family through her professional portrait business. Her book Observations, though never officially published, was one of the first instructional books ever written by a woman, and boldly announced her authority on painting. Mary Beale stood apart from other women due to her outspokenness and successful business that allowed her to be the breadwinner of the family.

Mary Cradock was born in Suffolk, England in late March. She was baptised on 26 March 1633 by her father John Cradock in the rectory of St Paul's Church in Barrow, Suffolk. Her mother was Dorothy; her maiden name is illegible on her marriage record to John Cradock. Aside from being a rector, John Cradock was also an amateur painter, who may have taught Mary how to paint. It was common for fathers to teach their daughters how to paint at the time. Growing up in Barrow, Mary lived close to Bury St Edmunds. A group of painters worked in Bury St Edmunds, including Peter Lely and Matthew Snelling, whom Mary may have met in her youth. On 23 August 1643, John and Dorothy Cradock gave birth to a son named John. Dorothy died not long after the birth. During the Civil War, John Cradock appointed Walter Cradock, a distant cousin of his, as guardian of his children John and Mary.

Mary Cradock met Charles Beale, a cloth merchant who was also an amateur painter, during a visit to the Heighams of Wickhambrook, who were related to the Yelverton and Beale families. Charles Beale wrote her a passionate love letter and poem on 25 July of an unknown year. Mary Cradock married Charles Beale on 8 March 1651/2 at the age of eighteen. Her father, John Cradock, was gravely ill at the time and died a few days after Mary's marriage. The couple moved to Walton-on-Thames at some point afterward. Charles Beale was a Civil Service Clerk at the time, but eventually became Mary's studio manager once she became a professional painter. At some point, Charles was working for the Board of Green Cloth where he mixed colour pigments. Throughout their marriage, Mary and Charles worked together as equals and as business partners, which was not often seen at the time. On 18 October 1654 Charles and Mary's first son, Bartholomew, was buried. Little else is known about their first son. Their second son was baptised on 14 February 1655/6 and also named Bartholomew. Their third son Charles was born in 1660.

The most common way to learn how to paint at the time was to copy great works and masterpieces that were accessible. Mary Beale preferred to paint in oil and water colours. Whenever she did a drawing, she would draw in crayon. Peter Lely, who succeeded Anthony van Dyck as the court painter, took a great interest in Mary's progress as an artist, especially since she would practice painting by imitating some of his work. Mary Beale started working by painting favours for people she knew in exchange for small gifts or favors. Charles Beale kept close record of everything Mary did as an artist. He would take notes on how she painted, what business transactions took place, who came to visit, and what praise she would receive. Charles wrote thirty notebooks' worth of observations over the years, calling Mary "my dearest heart". She became a semi-professional portrait painter in the 1650s and 1660s, working from her home, first in Covent Garden and later in Fleet Street in London.