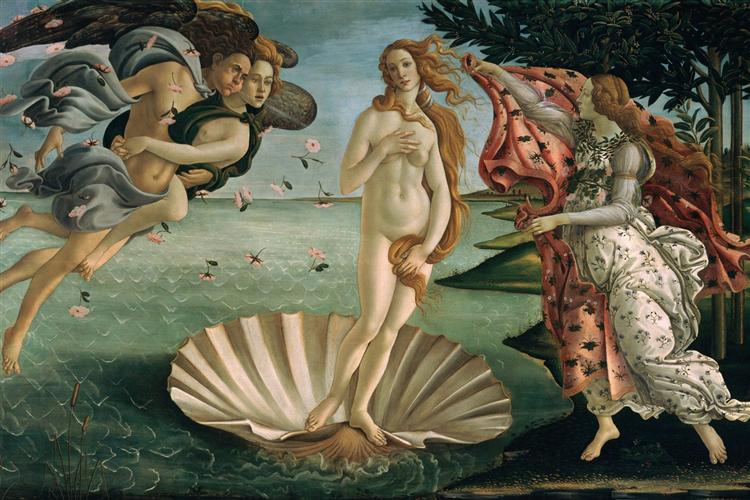 The Birth of Venus

The Birth of Venus, painted by Sandro Botticelli in the 1480s, is one of the most famous paintings in the world: it is a celebrated work of art and the high point of a visit to the Uffizi Gallery in Florence. It is also a commercial icon and a line mark of European Art.

The real subject of the painting and its meaning is a mystery under discussion. Over the centuries, many theories and interpretations have been developed, proving the complexity of this work of art. The composition of the painting is quite simple: in the center, there’s a figure of Venus, goddess of love, standing in a shell being washed up on a beach, blown there by two personifications of winds visible on the left, and welcomed by a maiden on the right. There is a contrast between the title of the work and what it represents: we do not see the moment of Venus’ birth. According to the myth, she was born from the foam of the sea, but the painting shows us the moment when she arrives on land. It is clear that the personifications of the winds are Zephyrus and Aura, one impetuous and the other moderate. But the figure of the girl is uncertain: she could be Spring, a subject dear to Botticelli, because her dress is full of flowers, or the personification of motherhood, or one of the Three Graces. She has branches of roses around her waist, and myrtle branches around her neck - sacred plants for Venus.

The painting is a masterpiece of linearity and harmonious design, clarity, and brightness of colors, which includes the use of gold in a lot of detail. We have to remember that the painting today is not as glorious it was initially. The colors were brighter, especially the greens of the trees, and the blue of the sky.

The Birth of Venus is a work of extraordinary innovation, from many points of view. First, it is a representation of a nude woman: this kind of subject was restricted during the Medieval ages - the only exception was an image of Eve in the Garden of Eden. Botticielli produced the image of a beautiful naked woman, with a gaze that is remarkably in direct engagement with the viewer. Next, there is the news of the mythological theme that in the 1480s was absolutely a new type of painting. Botticelli obviously read classical texts before painting it: for example, the Roman writer Plinio made the description of the painting by the Greek artist Apelles that showed Venus rising from the sea or a Homeric hymn that told about Zephyrus that blows his wind on Aphrodite.

But not only the classical world was the source of Botticelli's work. He depicted the scene with a solemnity that recalls a religious rite; the disposition of the characters and their gestures remind representations of the Baptism of Christ, like that of Verrocchio, which Botticelli had certainly seen. This iconographic analogy alludes, perhaps, to a thematic analogy between the mythical birth of the goddess from the sea and the Christian birth of the soul from the water of Baptism.

It is highly probable that the work was commissioned by a member of the Medici family (perhaps by Lorenzo di Pierfrancesco de' Medici, a major patron of Botticelli, under the influence of his cousin Lorenzo de' Medici, "il Magnifico"), although there is nothing written about the painting before 1550, when Giorgio Vasari describes it in the Medici’s Villa of Castello, owned by the cadet branch of the Medici family since the mid-15th century. This hypothesis would seem to be born out by the orange trees in the painting, which are considered an emblem of the Medici dynasty, on account of the assonance between the family name and the name of the orange tree, which at the time was ‘mala medica’.

The Birth of Venus (Italian: Nascita di Venere [ˈnaʃʃita di ˈvɛːnere]) is a painting by Sandro Botticelli probably made in the mid 1480s. It depicts the goddess Venus arriving at the shore after her birth, when she had emerged from the sea fully-grown (called Venus Anadyomene and often depicted in art). The painting is in the Uffizi Gallery in Florence, Italy.

Although the two are not a pair, the painting is inevitably discussed with Botticelli's other very large mythological painting, the Primavera, also in the Uffizi. They are among the most famous paintings in the world, and icons of the Italian Renaissance; of the two, the Birth is even better known than the Primavera. As depictions of subjects from classical mythology on a very large scale they were virtually unprecedented in Western art since classical antiquity, as was the size and prominence of a nude female figure in the Birth. It used to be thought that they were both commissioned by the same member of the Medici family, but this is now uncertain.

They have been endlessly analysed by art historians, with the main themes being: the emulation of ancient painters and the context of wedding celebrations (generally agreed), the influence of Renaissance Neo-Platonism (somewhat controversial), and the identity of the commissioners (not agreed). Most art historians agree, however, that the Birth does not require complex analysis to decode its meaning, in the way that the Primavera probably does. While there are subtleties in the painting, its main meaning is a straightforward, if individual, treatment of a traditional scene from Greek mythology, and its appeal is sensory and very accessible, hence its enormous popularity.

In the centre the newly-born goddess Venus stands nude in a giant scallop shell. Its size is purely imaginary, and is also found in classical depictions of the subject. At the left the wind god Zephyr blows at her, with the wind shown by lines radiating from his mouth. He is in the air, and carries a young female, who is also blowing, but less forcefully. Both have wings. Vasari was probably correct in identifying her as "Aura", personification of a lighter breeze. Their joint efforts are blowing Venus towards the shore, and blowing the hair and clothes of the other figures to the right.

At the right a female figure who may be floating slightly above the ground holds out a rich cloak or dress to cover Venus when she reaches the shore, as she is about to do. She is one of the three Horae or Hours, Greek minor goddesses of the seasons and of other divisions of time, and attendants of Venus. The floral decoration of her dress suggests she is the Hora of Spring.

Alternative identifications for the two secondary female figures involve those also found in the Primavera; the nymph held by Zephyr may be Chloris, a flower nymph he married in some versions of her story, and the figure on land may be Flora. Flora is generally the Roman equivalent of the Greek Chloris; in the Primavera Chloris is transformed into the figure of Flora next to her, following Ovid's Fasti, but it is hard to see that such a transformation is envisaged here. However, the roses blown along with the two flying figures would be appropriate for Chloris.