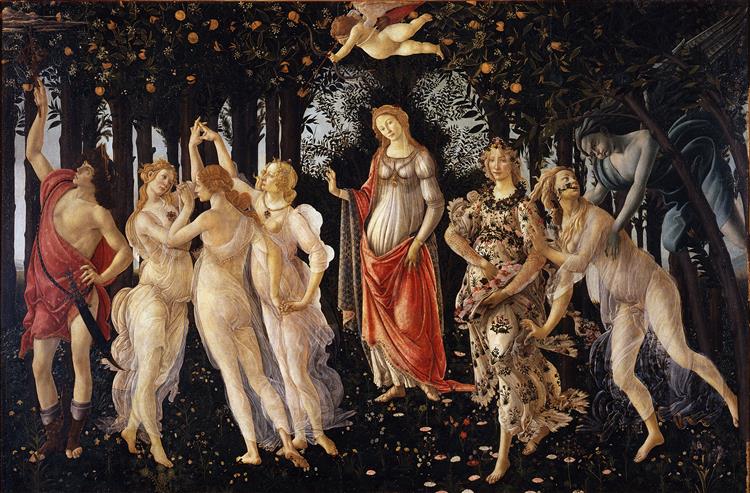 In The Spring, Botticelli creates an intellectual painting, addressed to a narrow circle of public able to recognize complex literary, philosophical, and iconographic references. Such as those that were formulated in Florentine intellectual circles, created by the Medici family. There are many interpretations proposed to dissolve the message of this work, made up of symbols and allegories. The characters can be identified on the basis of the comparison with different literary sources: the poem Stanze for the carousel by Angelo Poliziano, contemporary of Botticelli, or with the texts of Latin authors most read in the 15th century, such as Lucrezio, Ovidio, Orazio.

The painted scene takes place in the garden of the Hesperides, the garden of the gods where the golden apples grow, identified in the Renaissance with the earthy oranges and lemons (which is why in the courts of Italian nobles there was always a citrus grove). The flowery lawn is rich in many different types of wildflowers. The characters are divided into groups. On the right there is a narrative scene: Zephyrus, the biting wind that announces spring in March, tries to kidnap the nymph Flora, who, frightened, tries to escape the kidnapping. In the end, Flora, possessed by the god, would agree to marry him and, as a gift, would be transformed into Flora, the Spring, eternally young and fruitful divinity.

In the center of the painting is Venus, goddess of sacred love, leaning against a myrtle bush, the sacred plant that symbolizes her. Above her, Cupid flies high, blindfolded. His wings come out of the painting, he launches a fiery arrow towards the Three Graces, the three successive figures of the work, intent in a dance in a circle. The last character, on the left, is Mercury, the messenger god, which can be recognized by the winged shoes and the petasus, the typically pointed hat of travelers. The god, with his rod, the caduceus, keeps away the clouds that threaten this ideal and eternal garden, where everything is a harmony of forms and feelings, a perfect microcosm, mirror of a universal macrocosm.

Framed by the plants of the garden, the characters are painted by Botticelli with graceful poses and seem to barely touch the lawn of flowers, as if they were very light. Botticelli has no interest in weighing the muscles of the figures: he paints them sinuously, using curves and not right angles, to give the idea of characters out of time. For this reason, the painter also chooses bright colors, sometimes transparent, as in the dress of the nymph or graces. Botticelli inserted more than five hundred plant species into the painting, of which only two hundred were coming from Tuscany, making this art a herbarium in painting.

However, the possibility of identifying the characters does not exhaust the meaning of the work of art. Venus, in a central position, is here painted not as the goddess of love but, as the Humanists considered her, goddess of humanitas, intellectual activities that elevated men from the world of the senses, personified by Zephyr, to the world of reason, Mercury. For this reason, Zephyr and Mercury are placed at two opposite poles of the painting. The makers of this process are the three Graces, seen in the Renaissance as an allegory of intellectual faculties.

Two of the Graces wear jewelry from the Medici family at their necks, making explicit a political meaning of the painting, that can be read as an allegory of the task of the Medici family in Florence. The only lineage that, being patron and protector of artists, can ignite this process of elevation and the flowering of Florence, which could be the place of the intellectual Spring of the new world, reborn in the Renaissance. This thesis is supported by a documentary source that says that the painting was commissioned to Botticelli in 1478, for the birth of Giulio, son of Giuliano de Medici, brother of Lorenzo the Magnificent.

Primavera (Italian pronunciation: [primaˈveːra], meaning "Spring"), is a large panel painting in tempera paint by the Italian Renaissance painter Sandro Botticelli made in the late 1470s or early 1480s (datings vary). It has been described as "one of the most written about, and most controversial paintings in the world", and also "one of the most popular paintings in Western art".

The painting depicts a group of figures from classical mythology in a garden, but no story has been found that brings this particular group together. Most critics agree that the painting is an allegory based on the lush growth of Spring, but accounts of any precise meaning vary, though many involve the Renaissance Neoplatonism which then fascinated intellectual circles in Florence. The subject was first described as Primavera by the art historian Giorgio Vasari who saw it at Villa Castello, just outside Florence, by 1550.

Although the two are now known not to be a pair, the painting is inevitably discussed with Botticelli's other very large mythological painting, The Birth of Venus, also in the Uffizi. They are among the most famous paintings in the world, and icons of the Italian Renaissance; of the two, the Birth is even better known than the Primavera. As depictions of subjects from classical mythology on a very large scale they were virtually unprecedented in Western art since classical antiquity. It used to be thought that they were both commissioned by the same member of the Medici family, but this is now uncertain.

The history of the painting is not certainly known, though it seems to have been commissioned by one of the Medici family. It draws from a number of classical and Renaissance literary sources, including the works of the Ancient Roman poet Ovid and, less certainly, Lucretius, and may also allude to a poem by Poliziano, the Medici house poet who may have helped Botticelli devise the composition. Since 1919 the painting has been part of the collection of the Uffizi Gallery in Florence, Italy.

The painting features six female figures and two male, along with a cupid, in an orange grove. The movement of the composition is from right to left, so following that direction the standard identification of the figures is: at far right "Zephyrus, the biting wind of March, kidnaps and possesses the nymph Chloris, whom he later marries and transforms into a deity; she becomes the goddess of Spring, eternal bearer of life, and is scattering roses on the ground." Chloris the nymph overlaps Flora, the goddess she transforms into.

In the centre (but not exactly so) and somewhat set back from the other figures stands Venus, a red-draped woman in blue. Like the flower-gatherer, she returns the viewer's gaze. The trees behind her form a broken arch to draw the eye. In the air above her a blindfolded Cupid aims his bow to the left. On the left of the painting the Three Graces, a group of three females also in diaphanous white, join hands in a dance. At the extreme left Mercury, clothed in red with a sword and a helmet, raises his caduceus or wooden rod towards some wispy gray clouds.