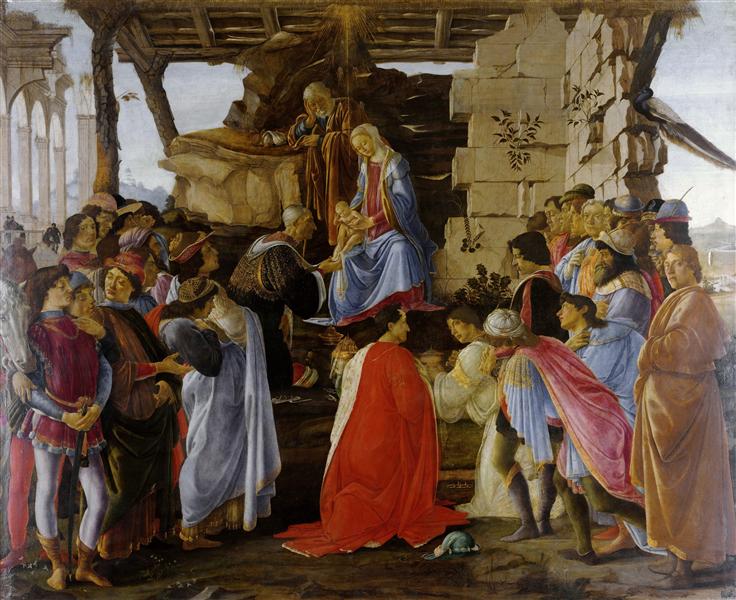 The Adoration of the Magi

Around 1475, Gaspare di Zanobi del Lama, a Florentine wealthy money changer and courtier of the Medici family, commissioned Sandro Botticelli, still a young painter protected by the Medici family, to paint an altarpiece for his funeral chapel in the church of Santa Maria Novella.

The work of the currency exchange was not well seen by the morality of the time: the people who exercised it were treated as usurers, because they got wealthy at the expense of their customers. For this reason, the members of the Arte del Cambio, the guild of which Gaspare di Zanobi was a part, used to invest great wealth in the creation of funerary monuments, making generous donations to the churches that accepted to host remains of them and their families. He wanted the chapel to be dedicated to the Epiphany, of which the Botticelli table was to be the main work of art. Above the table, Botticelli also painted the Adoration of the Child (1976), now detached and moved above the central portal of the Church, on the counter-façade.

The scene depicts the moment in which the three wise men, Magi, arrived at the birthplace of Jesus Christ. In the history of Florentine art, this scene was frequently painted. In Florence there never existed a real legitimate noble lineage, so every family that came to power commissioned to a painter an Adoration of the Magi and asked to portrait the members of the family as wise men bowed before Jesus, in order to show to the citizen that their government was blessed by God.

Botticelli fitted into this tradition, but he wanted to produce new, original work. He painted the usual subject: the Magi arriving at the manger. But, if in previous paintings the scene was depicted with the Kings arrived at the stable stately manger fitting for the Son of God, the young Botticelli chose to place the scene in a dilapidated Roman ruin. At the center of this structure, he placed a sturdy rock for Mary and Jesus, to sit high above their visitors. With this decision, Botticelli seemed to say: Christianity will be built on sturdier materials than Rome.

The painter then populated the space with important men from his city. On the right side of the artworks, dressed in light blue, is the man who paid for it: Gaspare di Zanobi del Lama, looking out at the viewer and confidently pointing at himself, as to say that he gifted this beautiful piece of art to humanity. To paint the three Magi, appearing at the center of this painting, kneeling to Mary and Jesus, Botticelli took as models the members of the Medici family. This is a tribute wanted by the purchaser of the work: his wealth would not have been possible had he not been a courtier protected by Medici. In particular, by Cosimo de Medici, whom Botticelli painted prominently at Mary’s feet, in the act of bowing to kiss the Child's foot. The other Wise can be identified as Piero and Giovanni de Medici, Cosimo’s two sons. They are kneeling, speaking one each other. Finally, on the left in the painting, there is the portrait of the young Lorenzo il Magnifico, standing, with his hands entwined around the sword, who watches the scene as saying: today is your day, but I am the future.

Botticelli filled the rest of the space with other friends and influential figures from Florence, and among them, on the right, the confident young artist painted himself, looking directly at the viewer. His presence in this painting illustrates a radical shift in the perception of artists during this time period: Botticelli did not view himself as an ordinary craftsman hired for a simple job, he saw himself as a friend to the powerful families of Florence.

In the scene numerous characters are present, among which are several members of the Medici family: Cosimo de' Medici (the Magus kneeling in front of the Virgin, described by Vasari as "the finest of all that are now extant for its life and vigour"), his sons Piero (the second Magus kneeling in the centre with the red mantle) and Giovanni (the third Magus), and his grandsons Giuliano and Lorenzo. The three Medici portrayed as Magi were all dead at the time the picture was painted, and Florence was effectively ruled by Lorenzo.

Whether Botticelli's intimate relations with the Medici brothers allowed the wealthy Gaspare to introduce the portraits of their kinsmen in his altar-piece, or Gaspare was glad for this opportunity to pay a graceful compliment to these powerful personages is hard to tell. It is, however, apparent from the great pains in which Botticelli bestowed on these figures, that this formed an important part of the task.

Also Gaspare himself is said to be included in the painting, as the old man on the right with white hair and a light blue robe looking and pointing at the observer. Furthermore, also Botticelli is alleged to have made a self-portrait as the blonde man with yellow mantle on the far right.

In his Lives, Vasari describes the Adoration in the following way:

The attention to details, such as the garments rendering, show the acquisition by the Florentine artist of the influences from the Flemish school at this point of his career.