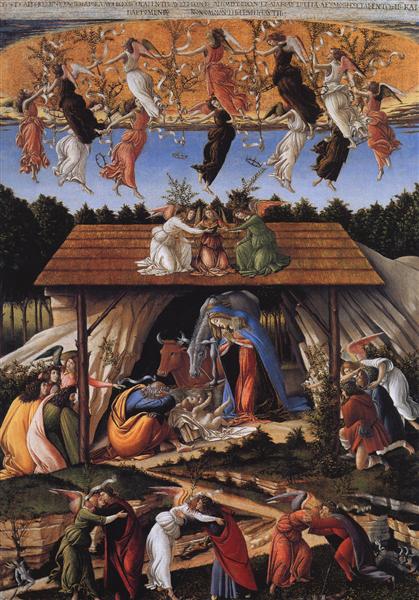 Botticelli’s fame faded after his death in 1510, as he quickly fell under the shadow of his great contemporaries Michelangelo and Raphael. This is his only signed painting. It was not until a British art collector named William Young Ottley, who bought the painting in 1799 and returned with it to England, that Botticelli’s fame began to rise. It was first exhibited in Manchester in 1857, where more than a million people viewed the painting. After the exhibition, Botticelli’s frescoes in Italy began to receive more and more attention, and artists were recreating Botticelli’s image in monographs by 1893. His popularity was still spreading, and in the first two decades of the 20th century, more works were written about Botticelli than any other artist.

The Mystical Nativity is a painting of circa 1500–1501 by the Italian Renaissance master Sandro Botticelli, in the National Gallery in London. Botticelli built up the image using oil on canvas. It is his only signed work, and has an unusual iconography for a Nativity.

The Greek inscription at the top translates as: "This picture, at the end of the year 1500, in the troubles of Italy, I Alessandro, in the half-time after the time, painted, according to the eleventh [chapter] of Saint John, in the second woe of the Apocalypse, during the release of the devil for three-and-a-half years; then he shall be bound in the twelfth [chapter] and we shall see [him buried] as in this picture". Botticelli believed himself to be living during the Tribulation, possibly due to the upheavals in Europe at the time, and was predicting Christ's Millennium as stated in Biblical text.

It has been suggested that the painting may be connected with the influence of Savonarola, whose influence appears in a number of late paintings by Botticelli, though the contents of the image may have been specified by the person commissioning it. The painting uses the medieval convention of showing the Virgin Mary and infant Jesus larger both than other figures, and their surroundings; this was certainly done deliberately for effect, as earlier Botticellis use correct graphical perspective.

The Mystical Nativity depicts a scene of joy and celebration, of earthly and heavenly delight, with angels dancing at the top of the painting. At the top of the painting stands Sandro Botticelli's name – but also the apocalyptic and troubling words. And there are dark premonitions – the helpless child rests on a sheet that evokes the shroud in which his body will one day be wrapped, while the cave in which the scene is set calls to mind his tomb. The Kings on the left bear no gifts, but their own devotion. At the top of the painting twelve angels dressed in the colours of faith, hope and charity dance in a circle holding olive branches, and above them heaven opens in a great golden dome, while at the bottom of the painting three angels embrace three men, seeming to raise them up from the ground. They hold scrolls which proclaim in Latin, "peace on earth to men of goodwill". Behind them seven devils flee to the underworld, some impaled on their own weapons. In Renaissance times Last Judgment paintings showed viewers the reckoning of the damned and the saved at the time of Christ's Second Coming. In echoing this kind of painting the Mystical Nativity is asking us to think not only of Christ's birth but of his return.." (Jonathan Nelson, Syracuse University in Florence).

The painting emerged from the city of Florence in a time when the fanatical preacher Savonarola held the city in its grip. He had arrived in Florence in 1490 but had been repelled by the artistic glory and enormous wealth that so impressed the world. He preached that this was a corrupt and vice-ridden place. A great scourge was approaching – and then his words had assumed a terrifying reality: the Italian War of 1494–1498. In 1494 a huge French army invaded Italy and 10,000 troops entered Florence so that the Florentines feared the King of France meant to sack the city. Savonarola stepped into the political vacuum, he met with the French king and persuaded him to leave Florence peacefully. In their gratitude and relief the Florentines increasingly saw the friar as a prophet and his preaching attracted huge crowds to Florence Cathedral. Savonarola claimed that Florence could become the new Jerusalem if the citizens would repent and abandon their sinful luxuries – and that included much of their art. His beliefs were made real as groups of evangelical youths went on to the streets to encourage people to part with their luxuries, their lewd pictures, and books, their vanities, combs, mirrors. Botticelli may well have seen his own paintings fed to the flames. Yet the artist might not have objected because, like much of the city, he too had come under the sway of Savonarola. It seems that a sermon preached by Savonarola bears directly upon the Mystical Nativity.