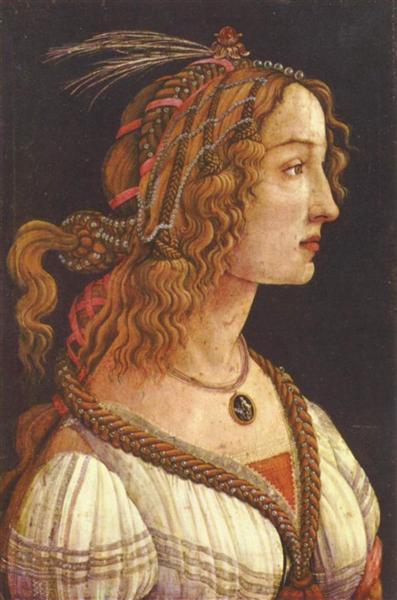 Portrait of a young woman

Portrait of a Young Woman is a painting which is commonly believed to be by the Italian Renaissance painter Sandro Botticelli, executed between 1480 and 1485. Others attribute authorship to Jacopo da Sellaio. The woman is shown in profile but with her bust turned in three-quarter view to reveal a cameo medallion she is wearing round her neck. The medallion is a copy in reverse of "Nero's Seal", a famous antique carnelian representing Apollo and Marsyas, which belonged to Lorenzo de' Medici.

It is housed in the Städel Museum of Frankfurt, Germany. Other similar Botticelli paintings are to be found in the National Gallery, London, the Gemäldegalerie, Berlin, and in the Marubeni Collection, Tokyo.

David Alan Brown of the National Gallery of Art in Washington, D.C. describes the painting as of an ideally beautiful young woman mythologised as a nymph or goddess, a view reflected in the title given it by the Städel. It belongs to a group of such paintings by Botticelli or his workshop.

The art historian Aby Warburg first suggested the painting was an idealised portrait of Simonetta Vespucci.

It is suggested that Quattrocento paintings of hair and water are related, though it is uncertain which most informs the other.