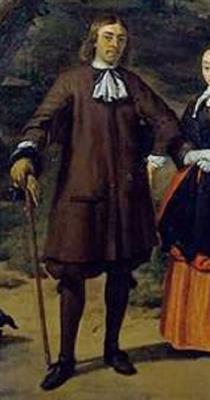 Adriaen did not want to become a marine painter so he was trained in the studio of Jan Wynants, the landscape painter. There he made the acquaintance of Philip Wouwerman, who is believed to have aided him in his studies of animals, and to have exercised a powerful and beneficial influence upon his art. Having made exceptionally rapid progress, he was soon employed by his master to introduce figures into his landscape compositions, and he rendered a similar service to Hobbema, Ruisdael, Verboom and other contemporary artists. According to Houbraken, he died while in collaboration with Jan van der Heyden and Frederik de Moucheron, painting animals on their paintings.

His favourite subjects were scenes of open pasture land, with sheep, cattle and goats, which he executed with dexterity, with much precision of touch and truth of draughtsmanship, and with clear silvery colouring. He painted a few small winter scenes with skaters, and several religious subjects, such as the Descent from the Cross, for a Roman Catholic hidden church in Amsterdam and The Migration of Jacob (1663, Wallace Collection).

In addition to his paintings, of which nearly two hundred have been catalogued, he executed about twenty etchings, several of which appear from their dates to have been done in his fourteenth year. They are distinguished by directness of method and by delicacy and certainty of touch. Van de Velde lived in Kalverstraat, near the Regulierspoort.