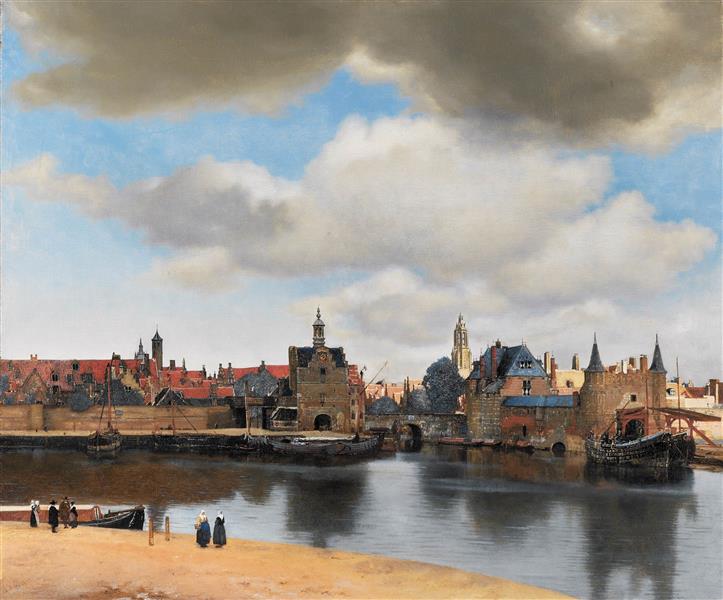 The Dutch Golden Age is one of the finest western examples of independence breeding cultural pride. During the 17th century, driven by new freedom from Spanish Catholic rule, the Dutch Republic experienced a surge in economic and cultural prominence. An influx of trade boosted commerce, leading to the rise of a large middle and merchant class in the market for the proliferation of art that had cropped up in response to the burgeoning celebration of Dutch life and identity. Painting flowered as artists focused on everyday scenes of ordinary life, expressed through a growing cadre of genre works, all indicative of the thriving creative period. Genre painting experienced a magnificent evolution, with multiple creative sub-genres birthing a distinct look at the contemporary lifestyle, trends, and interests of the Dutch people of the time. Subjects ranging from lavish breakfast tables to group portraits to moments of merriment and little trifles helped establish an artistic document of the period. As a result, some scholars have referred to the Dutch Golden Age painting as Dutch Realism.

Landscape painting exploded during the Dutch Golden Age as well, bringing with it emphasis upon the unique characteristics of Dutch landscape features, villages, and rural life connected with rising esteem for Dutch values. Many of these scenes were based on central "heroic" elements indigenous to the area such as a tree, windmill, or cloud-filled sky.

The stilleven, or still life also surged in popularity, utilized to imaginatively express both objects of beauty and the philosophical climate of the times through carefully composed arrangements and groupings. This dominant element of Dutch art developed into a number of subtypes of which floral still life, presented with scientific accuracy, was the most popular.

Dutch Golden Age painting was informed by a number of artistic influences, including the landscapes and village scenes of Pieter Bruegel the Elder, the work of the anonymous Master of The Small Landscapes, and the Northern European Renaissance artists (such as Jan van Eyck, Albrecht Dürer, and Hieronymus Bosch and Utrecht Caravaggisti). However, it was primarily a reflection of the Dutch Golden Age's cultural, economic, and scientific domination of the era.

Frans Hals was an early pioneer of Dutch Golden Age painting, both in his portraiture and his genre work. He became famous with his group portrait The Banquet of the Officers of the St. George Militia Company (1616), and was much sought after as a portraitist in the decades following for his realistic individualized treatments. He emphasized a character-capturing moment and the employment of natural light depicted with a visible brushstroke to convey vitality. His work in genre was equally pioneering, as shown in his Yonker Ramp and His Sweetheart (1623), depicting a cavalier and his sweetheart in a moment of merriment. He influenced many subsequent Golden Age painters including Adriaen van Ostade, Adriaen Brouwer, and Judith Leyster.

While the academy considered historical painting, a category that also included Biblical, mythological, and allegorical subjects, the highest form of painting, the taste and sensibility of the Dutch Golden Age preferred works that depicted ordinary subjects. Nonetheless, masterworks of historical painting were created in the era, most notably by Rembrandt. Originally focusing on history painting, he found success as a portraitist, though his interest in history painting never faded, as seen in his Aristotle Contemplating the Bust of Homer (1653) and Lucretia (1666). The category also allowed for painting the nude, and his works like Bathsheba Holding King David's Letter (1654) are the few nude masterpieces of the era.

The Dutch Golden Age began to decline with the start of the Franco-Dutch War, when the French invaded the Netherlands in 1672. To expel the invaders the Dutch broke the dykes, flooding much of the land, and, as a result, the Dutch still refer to 1672 as "The Disaster Year." As the economy crashed, so did the art market, impacting artists including Vermeer who went bankrupt. By the time the war ended in 1678, Dutch power had been severely diminished and the art market never recovered.

Nonetheless, Dutch genre works influenced French painters, including Jean Siméon Chardin, Jean Baptiste Greuze, and Jean Honoré Fragonard, as Rococo style, led by the French, became dominant in the early 1700s. However, in general the works of many Dutch masters, including Rembrandt, Hals, and Vermeer fell out of favor in the late 17th through 18th centuries. As classical refinement was favored, Hals' brushwork was critiqued as slapdash, and critics took umbrage at the gritty humanism of Rembrandt.

Rembrandt was rediscovered during the Romantic movement in the early 1800s, as the critic William Hazlitt described him as "a man of genius" who "took any object, he cared not what, how mean soever in form, color and expression, and from the light and shade which he threw upon it, it came out gorgeous from his hands." As a result, Rembrandt informed Eugene Delacroix and J.M.W. Turner, by what Turner called his "veil of matchless color." His influence on artists continued throughout the 19th century, affecting Vincent van Gogh, Auguste Rodin, and Thomas Eakins, and into the 20th century where he had an impact on the work of Pablo Picasso, Frank Auerbach, and Francis Bacon, and countless others.

Jacob van Ruisdael was rediscovered in the late 1700s by John Constable who owned four of the artist's etchings and copied a number of the artist's works. Subsequently, Van Ruisdael's landscapes were a primary influence upon the Barbizon School and the Hudson River School.

In 1842 the art critic Théophile Thoré-Bürger rediscovered Vermeer whom he dubbed "the Sphinx of Delft," along with other Dutch Golden Age painters including Hals and Carel Fabritius. As a result a number of artists including Gustave Courbet, James Abbott McNeill Whistler, Édouard Manet, Edgar Degas, Camille Pissarro, and Claude Monet were influenced by the artist's realistic depiction of ordinary life, and his painting of the effects of light. Hals' rough style had a noted influence on later artists of the Realist movement, including Gustave Courbet and Manet, as well as the Impressionists Monet and Mary Cassatt.

Additionally Dutch still lifes had a noted impact on Western art, as the subject remained popular into the modern era, as seen in the works of Vincent van Gogh, Paul Cezanne, Emil Nolde, Giorgio Morandi, and Henri Matisse. Dutch landscape painting influenced the development of the Barbizon School, the Hudson River School, Tonalism, and Luminism.