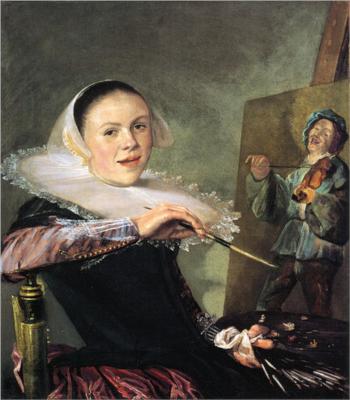 Judith Jans Leyster (also Leijster) (c. July 28, 1609– February 10, 1660) was a Dutch Golden Age painter. She painted genre works, portraits, and still lifes. Her entire oeuvre was attributed to Frans Hals or to her husband, Jan Miense Molenaer, until 1893 when Hofstede de Groot first attributed seven paintings to her, six of which are signed with her distinctive monogram 'JL*'. Misattribution of her works to Molenaer may have been because after her death many of her paintings were inventoried as "the wife of Molenaer", not as Judith Leyster.

Leyster was born in Haarlem, the eighth child of Jan Willemsz Leyster, a local brewer and clothmaker. While the details of her training are uncertain, she was already well enough known in 1628 to be mentioned in a Dutch book by Samuel Ampzing titled Beschrijvinge ende lof der stadt Haerlem.

There is some speculation that Leyster pursued a career in painting as a result of her father's bankruptcy and the need to bring in funds for the family. She may have learned painting from Frans Pietersz de Grebber, who was running a respected workshop in Haarlem in the 1620s. During this time her family moved to the province of Utrecht, and she may have come into contact with some of the Utrecht Caravaggisti.

Her first known signed work is dated 1629, four years before she entered the artists' guild. By 1633 she was a member of the Haarlem Guild of St. Luke. There is some debate as to who was the first woman registered with the Guild, with some sources saying it was Leyster in 1633 and others saying it was Sara van Baalbergen in 1631. Dozens of other female artists may have been admitted to the Guild of St. Luke during the 17th century; however, the medium in which they worked was often not listed (at this time artists working in embroidery, pottery painting, metal and wood were included in guilds) or they were included as continuing the work of their dead husbands.

Leyster's Self-Portrait, c. 1633 (National Gallery of Art, Washington, D.C.), has been speculated to have been her presentation piece to the Guild. This work marks a historical shift from the rigidity of earlier women's self-portraits, in favor of a more relaxed, dynamic pose. It is very relaxed by the standards of any Dutch portrait, and comparable mainly with some by Frans Hals; although it seems unlikely that in reality she wore such formal clothes when painting in oils, especially the very wide lace collar.

Within two years of her entry into the Guild, Leyster had taken on three male apprentices. Records show that Leyster sued Frans Hals for accepting a student who left her workshop for that of Hals without permission of the Guild. The student's mother paid Leyster four guilders in punitive damages, only half of what Leyster asked for; and, instead of returning her apprentice, Hals settled the argument by paying a three-guilder fine. Leyster herself was fined for not having registered the apprentice with the Guild.