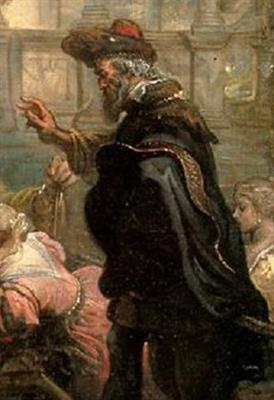 According to Houbraken he made many respected altarpieces but preferred to paint less lofty subjects such as village festivals, and weddings. He was also a good etcher, as could be seen from his etching made in Paris of Ulysses after Francesco Primaticcio. According to the RKD he married Maria van Balen, the daughter of the painter Hendrick van Balen and the sister of the painters Hendrick II and Jan van Balen.

His style is heavily indebted to Peter Paul Rubens, with whom he frequently worked, and he is important for bringing aspects of Flemish Baroque painting into the Dutch Republic. Attracted by the opportunities for large history and painting available in the Southern Netherlands that were not available in the cities in the north, he travelled to Antwerp around 1621, where he studied at the studio of Abraham van Blijenberch. In 1626 he became a master in the Guild of St. Luke. He worked in France, making copies of Mannerist paintings at Fontainebleau and working in Paris from 1631 and 1633. Van Thulden returned to Antwerp in 1634, where he worked frequently with Rubens. One of the large projects during this period was the production of engravings after Rubens's decorations for the joyous entry of Cardinal-Infante Ferdinand in 1635 (published in 1642). In 1637 he worked on the Torre de la Parada in Madrid. He returned to North Brabant in 1640, settling in his home city where he won a commission to make political allegories for the city council. Van Thulden continued to paint altarpieces and other commissions for Catholic patrons in the Southern Netherlands as well as political allegories–many related to the 1648 Peace of Westphalia–for local patrons. He also participated in the decorations for the Oranjezaal in the Huis ten Bosch, The Hague, a commission for Amalia von Solms that brought together Dutch and Flemish artists such as Gerard van Honthorst and Jacob Jordaens.