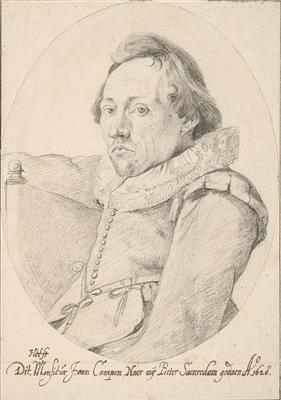 Pieter Jansz. Saenredam (9 June 1597 - buried 31 May 1665) was a painter of the Dutch Golden Age, known for his distinctive paintings of whitewashed church interiors such as Interior of St Bavo's Church in Haarlem and Interior of the Sint-Odulphuskerk in Assendelft.


Saenredam was born in Assendelft, the son of the Northern Mannerist printmaker and draughtsman Jan Pietersz Saenredam whose sensuous naked goddesses are in great contrast with the work of his son. In 1612 Saenredam moved permanently to Haarlem, where he became a pupil of Frans de Grebber. In 1614 he became a member of the Haarlem Guild of St. Luke. A drawing in the British Museum by his friend Jacob Van Campen shows him to be very short and hunch backed. He died in Haarlem.


Saenredam was a contemporary of the painter-architects Jacob van Campen, Salomon de Bray, and Pieter Post.


Saenredam specialized in the representation of church interiors. These pictures were based on precise measurements of the building and meticulously-rendered sketches, done on site, in pencil, pen, and chalk, after which washes were applied. Painting took place in the studio, often years after the studies were made.


Saenredam's emphasis on even light and geometry is brought out by comparing his works with those of the rather younger Emanuel de Witte, who included people, contrasts of light and such clutter of church furniture as remained in Calvinist churches, all usually ignored by Saenredam. Unlike de Witte's, Saenredam's views are usually roughly aligned with a main axis of the church.


Saenredam's paintings frequently show medieval churches, usually Gothic, but sometimes late Romanesque, which had been stripped bare of their original decorations after the iconoclasm of the Protestant Reformation. Although Utrecht was the centre of the remaining Catholic population of the mainly Calvinist United Provinces, all the old churches were retained by the Protestants. The drawing for Saenredam's Interior of St. Martin's Cathedral, Utrecht (above) is typical. As a Catholic church the Cathedral had been highly decorated. Then, in the Dutch Revolt the church fell into Protestant hands, it was ‘cleaned’ of Catholic influences. The altarpieces and statuary were removed, and the walls and ceiling were white washed.


Alternatively, the paintings of church interiors by Saenredam and other 17th-century Dutch painters have been interpreted as having less to do with religion and more with the new-found interest in perspective and with the Dutch interpretation (known as Dutch Classicism) of Palladio’s theories of proportion, balance and symmetry.

In any case, Saenredam wanted to record this time of change by documenting the country’s buildings. Many artists before him had specialized in imaginary and fanciful architecture, but Saenredam was one of the first to focus on existing buildings. According to the J. Paul Getty Trust "Saenredam’s church paintings...owe their poetry to his remarkable blend of fact and fiction. He began by making site drawings of buildings that record measurements and detail with archaeological thoroughness." This meticulous preparation helped him to create such accurate and enchanting paintings. The measurements aided him in using scientific linear perspective, just like Andrea Pozzo. He was able to use his measurements to create a realistic image with depth.