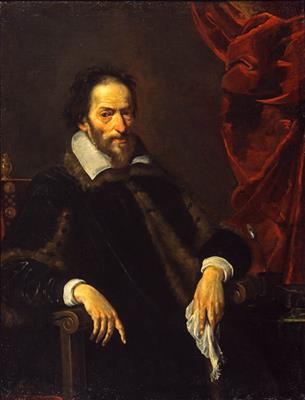 Bernardo Strozzi, named il Cappuccino and il Prete Genovese (c. 1581 – 2 August 1644) was an Italian Baroque painter and engraver. A canvas and fresco artist, his wide subject range included history, allegorical, genre and portrait paintings as well as still lifes. Born and initially mainly active in Genoa, he worked in Venice in the latter part of his career. His work exercised considerable influence on artistic developments in both cities. He is considered a principal founder of the Venetian Baroque style. His powerful art stands out by its rich and glowing colour and broad, energetic brushstrokes.

Strozzi was born in Genoa. He is not believed to be related to the Florentine Strozzi family. Bernardo Strozzi initially trained in the workshop of Cesare Corte, a minor Genoese painter whose work reflected the late Mannerist style of Luca Cambiaso. He subsequently joined the workshop of Pietro Sorri, an innovative Sienese painter residing in Genoa from 1596 to 1598. Sorri is credited with leading Strozzi away from the artificial elegance of Cambiaso's late Mannerist style towards a greater naturalism. In 1598, at the age of 17, Strozzi joined a Capuchin monastery, a reformist offshoot of the Franciscan order. During this time he likely painted devotional compositions for the order, including many scenes with St. Francis of Assisi whose life and deeds formed the inspiration of the order. While a monk of the Capuchin monastery of San Barnaba he came to be called by the nickname 'il Cappuccino' (the 'Capuchin monk'). Since he was allowed to abandon his Capuchin habit for that of a priest, he was also known as il prete genovese (the 'genovese priest').

When his father died around 1608, Strozzi left the Capuchin monastery to care for his mother and unmarried sister. He supported his family through his paintings. Strozzi's career took off during the next decade and Genoa's powerful Doria and Centurione families became his patrons. Bernardo Strozzi was able to secure commissions for grand mural decorations, which culminated in the important frescoes in the choir of the San Domenico church, commissioned by members of the Doria family, Giovanni Carlo and his cousin Giovanni Stefano. The work is now almost entirely destroyed and is only known through a preparatory oil bozzetto for the vault depicting ‘’The Vision of Saint Dominic (Paradise)’’, located at the Museo dell’Accademia Ligustica in Genoa. It is believed that from the end of April until the end of July 1625 he resided in Rome, to which he had been summoned by the friars of his order to support their attempt to create a stronger Capuchin presence in the papal city.

From the year 1625 Strozzi's relationship with the Capuchin order became strained. The order accused him of having committed a no longer known act that had purportedly caused 'disgrace to his sacred habit'. Some authors state that the act was the illegal practice of painting beyond the convent's walls. It is known that his Capuchin superiors condemned the secular paintings he was making such as his portraits and genre paintings. The conflict came to a head in 1630 when Strozzi refused to go back to the monastery following his mother's death and his sister's marriage. His superiors then had him imprisoned. His arrest lasted for about 17 to 18 months.