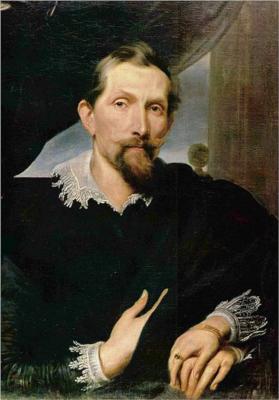 Frans Snyders or Frans Snijders (11 November 1579, Antwerp – 19 August 1657, Antwerp) was a Flemish painter of animals, hunting scenes, market scenes and still lifes. He was one of the earliest specialist animaliers and he is credited with initiating a wide variety of new still-life and animal subjects in Antwerp. He was a regular collaborator with leading Antwerp painters such as Peter Paul Rubens, Anthony van Dyck and Jacob Jordaens.

Snyders was born in Antwerp as the son of Jan Snijders, the keeper of a wine inn frequented by artists. According to legend the famous 16th-century painter Frans Floris squandered his fortune in the inn. Snyders' mother was Maria Gijsbrechts. Snyders had five siblings. His brother Michiel also became a painter but no works of him are known.

Snyders was recorded as a student of Pieter Brueghel the Younger in 1593, and subsequently trained with Hendrick van Balen, who was the first master of Anthony van Dyck. Snyders became a master of the Antwerp Guild of Saint Luke in 1602. He travelled to Italy in 1608-9 where he first resided in Rome. The artist subsequently traveled from Rome to Milan. Jan Brueghel the Elder had introduced him there by letter to the famous art collector Cardinal Borromeo. Brueghel asked Snyders to paint a copy after a portrait by Titian in the Borromeo collection. This is regarded as evidence that Snyders was a skilled figure painter before he turned his attention to still life painting.

Snyders had returned to Antwerp in the spring of 1609. In 1611 he married Margaretha, the sister of Cornelis de Vos and Paul de Vos, two leading painters in Antwerp. His collaboration with Rubens started in the 1610s.

Snyders had many patrons including the Ghent Bishop Antonius Triest who commissioned four paintings of market scenes around 1615 (Hermitage Museum, Saint Petersburg). He was a friend of van Dyck who painted Snyders and his wife more than once (Frick Collection, Kassel etc.). Snyders was commercially successful and was able to purchase a house on the high-end Keizerstraat in Antwerp. In 1628 he became the dean of the Guild of Saint Luke.

In the period 1636-1638 he was one of the Antwerp artists who assisted Rubens in a large commission for decorations for the hunting pavilion Torre de la Parada of Philip IV of Spain. The two artists also worked together on decorations for the Royal Alcazar of Madrid and the royal Buen Retiro Palace in Madrid. Snyders painted about 60 hunting paintings and animal pieces after designs by Rubens. In 1639 Rubens and Snyders received a follow-up commission for an additional 18 paintings for the hunting pavilion.

After Peter Paul Rubens' death Snyders acted as one of the appraisers of the inventory of Rubens' collection.